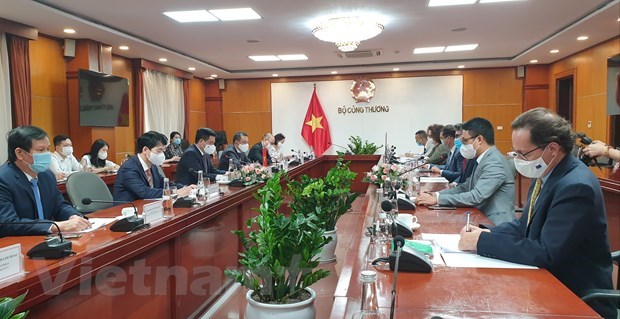 The meeting between Minister of Industry and Trade Nguyen Hong Dien and Ambassador Giorgio Aliberti, head of the EU Delegation to Vietnam (Photo: VietnamPlus)

Hanoi (VNA) – Minister of Industry and Trade Nguyen Hong Dien and Ambassador Giorgio Aliberti, head of the EU Delegation to Vietnam , had a working session in Hanoi on June 11 to discuss bilateral cooperation and the enforcement of the EU – Vietnam Free Trade Agreement (EVFTA).

The two sides affirmed that they attach importance to the Vietnam – EU comprehensive partnership, especially in economy, trade, and energy, pledging to keep coordinating more closely and effectively to promote cooperation activities and programmes and deal with bilateral issues in a timely manner.

Minister Dien lauded the EU's efforts and active moves that have helped it initially contain the pandemic and push back against risks to the bloc's economy.

With many economic indexes bouncing back well along with support packages and mass vaccination campaigns carried out, the EU economy is believed to recover rapidly and regain growth, he noted.

He also expressed his optimism about the prospect for trade and investment ties between Vietnam and the EU in the context of the global economy and trading still struggling with numerous difficulties caused by the COVID-19 pandemic.

Bilateral trade posted encouraging growth in the first months of 2021, which is largely attributed to the EVFTA that came into force on August 1 last year, Dien went on.

Between January and April, trade turnover between Vietnam and the EU stood at 18.26 billion USD, up 20.1 percent year on year, according to the General Department of Vietnam Customs.

At the session, the two sides had candid discussions on orientations for strengthening the Vietnam – EU cooperation and effectively implementing the bilateral FTA in the time to come so as to bring about practical benefits to the business community.

Minister Dien expressed his hope that the EU will continue supporting joint programmes and projects, particularly in energy and energy transition such as the EU – Vietnam Sustainable Energy Transition Programme (SETP) and the Vietnam Energy Partnership Group (VEPG).

As the EU boasts strengths in the high-tech industry, renewable energy, automation, and mechanical engineering, Vietnam expects to attract investment and technology transfer from the bloc, especially in terms of processing, manufacturing, and supporting industries, innovation, and technology transformation, to as to help develop a strong and modern industry for the country, the official added.

For his part, Ambassador Aliberti said the EVFTA is a significant milestone in the Vietnam – EU cooperation and also a great success the two sides have obtained during their efforts to foster economic and trade links.

He held that over the 10 months since it came into effect, the deal has generated highly positive results.

Challenges during the pact implementation are inevitable, he said, adding that relevant agencies of the EU, including the European Parliament, have been keeping a close watch on the enforcement process.

Via discussions, these challenges will be surmounted, the diplomat noted./.

Vietnam, EU to reinforce ties in FTA implementation have 794 words, post on en.vietnamplus.vn at June 14, 2021. This is cached page on Talk Vietnam. If you want remove this page, please contact us.