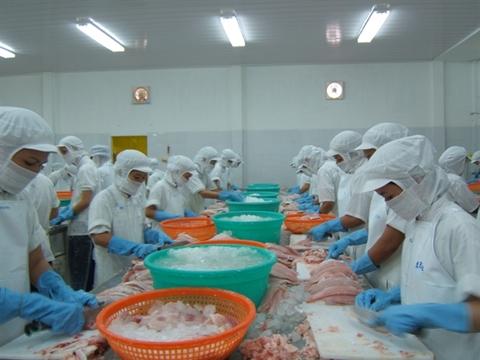 The Viet Nam Association of Seafood Exporters and Producers (VASEP) forecasts that Viet Nam’s tra fish (pangasius) exports will continue to grow in the coming months thanks to the control of the COVID-19 pandemic in importing countries, said VASEP secretary Truong Dinh Hoe.

According to VASEP, after having COVID-19 vaccines, the economic and trade activities of many countries have started to recover, so the countries have also increased imports of seafood from Viet Nam, especially tra fish products.

Viet Nam's total export value of pangasius in the first five months of 2021 reached US$600 million, an increase of 10 per cent compared to the same period in 2020.

The large export markets of Vietnamese pangasius in this period were China, US, Brazil and Thailand. Of which, the tra fish export value reached about $27 million to Brazil and $26 million to Thailand, a year-on-year increase of 38.7 per cent and 8.5 per cent, respectively.

“The export growth to Thailand, the largest pangasius importer in ASEAN, is a good signal to increase the pangasius export value to this region in the next quarter,” said Hoe.

In addition, the US market also increased imports of Vietnamese pangasius from the beginning of 2021, according to the association. In May, Viet Nam's tra fish export value to the US increased by 120 per cent over the same period last year, reaching more than $35 million. Since the end of 2020, the inventory of pangasius in the US has been limited. Meanwhile, the domestic catfish production has also declined. Therefore, the US has increased imports of frozen tra fish products from the beginning of this year.

The pandemic has had a significant impact on the sales strategy of Vietnamese seafood enterprises. Besides reducing trade activities due to the social distancing policy in many countries, high transportation costs and the shortage of containers have also had great impacts on Viet Nam's seafood exports, it said.

This forces the local seafood processing and exporting enterprises to change their sales strategies to keep customers and overcome difficulties during this period, according to VASEP.

Truong Tien Dung, general director of the Saigon Seafood Trading Joint Stock Company (APT), said the company's exports of pangasius and catfish products in the first five months of this year increased by 10 per cent over the same period in 2020.

To achieve this result, APT must actively discuss with customers to produce products according to demands of the export market, instead of offering products that the company produces. Therefore, it has enhanced production of new processed products from pangasius and catfish.

According to Ong Hang Van, deputy general director of the Truong Giang Seafood Joint Stock Company in Dong Thap Province, in the context of COVID-19, many seafood businesses have also changed their trading methods with partners.

The Ministry of Industry and Trade's Import-Export Department also forecasts that Viet Nam’s seafood exports by year end will continue growing due to increasing demand in the US and EU markets.

Although the economic recovery in the EU market is slower than that of the US, consumption demand is recovering because the pandemic is being controlled gradually. European importers tend to be more interested in Vietnamese seafood suppliers due to tariff advantages from the EVFTA and stable raw materials, according to VASEP.

Viet Nam’s seafood export value to the EU in May increased by 30 per cent to $95 million. The export value in the first five months reached $380 million, up 15 per cent over the same period last year.

For the US market, the implementation of the COVID-19 vaccination campaign along with economic stimulus package of the US Government have encouraged quick recovery of seafood consumption demand in this market. The higher seafood demand is not only in retail but also services, restaurants, hotels and entertainment after a period of social distancing due to the pandemic. The market has higher demand for shrimp, tuna, salmon, pangasius, squid, octopus, crabs and molluscs such as clams and mussels.

In addition, Viet Nam's seafood exports to countries with free trade agreements also increased sharply in the first five months, including to Australia (65 per cent), Canada (12 per cent), and to the UK (17 per cent). These markets are expected to play a significant role in promoting Viet Nam’s seafood export growth in 2021 and beyond. — VNS

Viet Nam's tra fish exports expected to continue recovering have 1068 words, post on bizhub.vn at June 11, 2021. This is cached page on Talk Vietnam. If you want remove this page, please contact us.