Although it may be geographically incorrect to say the world is a smaller place, as far as access to news is concerned, it's shrinking all the time.

If a big story breaks in Hà Nội at noon, chances are it will appear in a publication on the other side of the world in a matter of hours, sometimes even sooner.

That's why in this modern age of digital journalism we live in, being first with accurate and concise coverage really is King.

It's no surprise that Việt Nam is a hotbed of news.

As an emerging country in the Asia-Pacific region with fast and stable economic growth and increasing presence in the international arena, news stories come in abundance.

Throughout its 30-year journey as the only national English language daily print newspaper, Việt Nam News is always considered the voice of Việt Nam on diplomacy, business, economic development and social issues that reflect the country's non-stop movement.

Whether it is the first time Việt Nam has hosted important political events like the Asia-Pacific Economic Cooperation Leaders' Meeting or the DPRK-US Summit, the outbreak of dangerous contagious diseases like SARS or COVID-19, the glorious moments when shooter Hoàng Xuân Vinh won the first ever Olympics gold medal for the country, or the day Việt Nam took over the Presidency of the United Nations Security Council. Our reporters are always there to bring readers the latest stories in a quickest and most accurate manner. 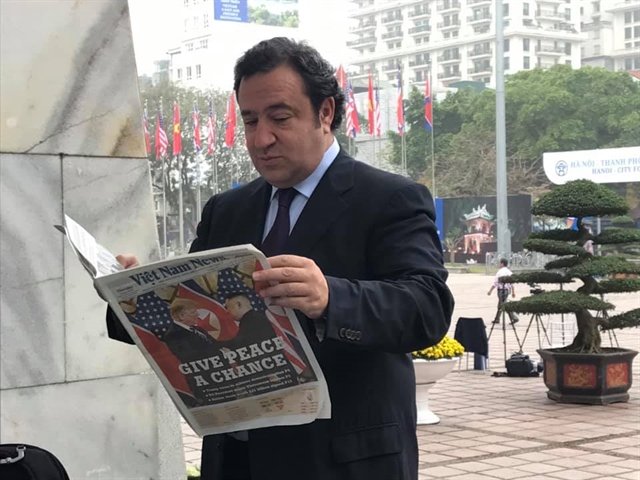 A foreign reporter reads Việt Nam News at the International Media Centre of the DPRK-US Summit in 2019. The front page of the edition later appeared on a CNN's morning news programme. VNS File photo

Every year, we produce an average of 50,000 stories, photo essays, and infographics for the print and hundred thousands of stories and videos for our online edition.

Thanks to the internet, our stories have spread far and wide beyond the country's border, bringing a new image of a post-war Việt Nam to readers from nearly 200 countries, with 50 per cent of our website traffic coming from abroad.

Our special coverage of the DPRK-US Summit that took place in Hà Nội in 2019 caught worldwide attention with reporters from all over the world sharing our stories and tweeting images of our print editions. The front page of the February 28, 2019 edition highlighting the historic handshaking of US President Donald Trump and DPRK leader Kim Jong Un appeared on a CNN's morning news programme.

A year earlier, our interview of Colonel Trần Trọng Duyệt, former head of Hỏa Lò Prison on the death of late US Senator John Mc Cain was quoted by the Washington Post in their story about the late senator.

More than that, there are many stories we have covered that not only highlight the pivotal moments of the country, but also reveal the truly outstanding achievements of its residents, which have played an important part to make up a truly amazing Việt Nam.

Like the story about the delivery driver, hailed a hero after catching a falling baby who had slipped from the balcony of a high rise apartment in Hà Nội.

That story, and the videos revealing his heroics appeared on many international publications with clips sourced and edited by the Việt Nam News team. 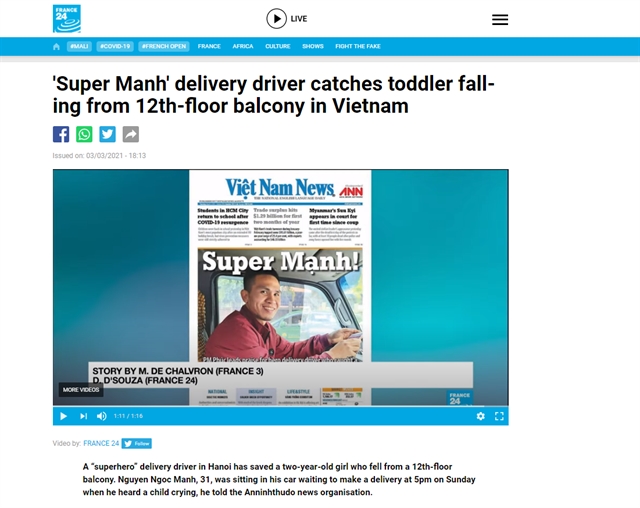 The front page of Việt Nam News March 2,2021 edition appears on a video posted on the website of France 24, a Paris-based international news channel. Screenshot photo

Or the pilot, a Scottish national working for Vietnam Airlines once considered the country's sickest COVID-19 patient.

His remarkable recovery, aided by the amazing medical staff that treated him at HCM City's Chợ Rẫy Hospital, was regularly documented in newspapers back in the United Kingdom, with many repeating quotes and reprinting photographs once again obtained by our staff.

Việt Nam News was also the first media outlet to break the news on the Corona burger, a creative idea of a businessman in Hà Nội that later appeared on leading media organisations like Reuters, CNN, BBC and CNBC.

And who can forget the remarkable medical miracle of the two conjoined baby girls separated by skilled surgeons in HCM City, a story that once again garnered international media coverage.

Since the momentous moment 30 years ago when the paper hit the newsstand, we have always strived to accomplish our mission of bridging Việt Nam and the world.

We take pride in that and it is our life-long mission for many more decades. VNS

Việt Nam News: a gateway to the world have 967 words, post on vietnamnews.vn at June 17, 2021. This is cached page on Talk Vietnam. If you want remove this page, please contact us.