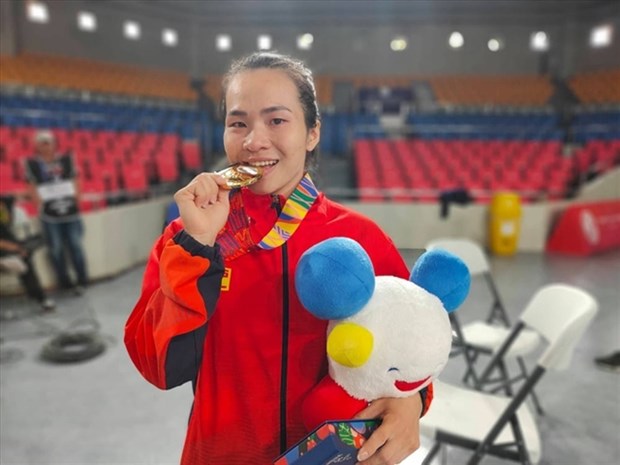 Vuong Thi Huyen will compete in her second Olympics this summer (Photo: thethao247.vn)

Hanoi (VNS/VNA) – Three Vietnamese weightlifters have qualified for the Tokyo Olympics next month.

The Vietnamese governing body must send its confirmation by June 25. However, the IWF reserves the right to withdraw quotas or ban athletes from participation based on the decision of its Executive Board in accordance with the qualification system or decision of the Independent Member Federations Sanctioning Panel in accordance with anti-doping rules and athlete eligibility.

In the latest IWF rankings, Huyen is No 7 in her category with 2,902 points. The 28-year-old also competed in the 2016 Olympics in Brazil.

Huyen is one of Vietnam’s top weightlifters and has won titles at the Asian championships, World Cup and SEA Games, as well as a world championship bronze.

Duyen, 25, is fourth in her pool with 3,463 points. She won the first international medal of the year for Vietnam by finishing third at the Asian Weightlifting Championship in Tashkent, Uzbekistan in January. Three months later, the SEA Games reigning champion brought home bronze from the Asian championship in Uzbekistan. Earlier, the Giay ethnic minority woman secured three golds from the Italian World Cup in 2020.

Tuan, who sits at No 3 in the world, will also compete in his second Olympics, following the 2016 event.

The 27-year-old is a national star in the 56kg class and made his name in prestigious tournaments over 10 years before the IWF changed its system and the class was replaced with the 55kg pool in 2018. Tuan moved to compete in the 61kg category and he pocketed three golds from the Italian World Cup in 2020 and silvers from the 2019 SEA Games.

“I breathed a sigh of relief when receiving the IWF letter. We will not lose our berths because of doping fines as we were warned previously,” said Do Dinh Khang, General Secretary of the Vietnam Weightlifting Federation.

These scandals threatened Vietnam’s weightlifting participation in Tokyo as IWF rules state any country with three or more doping cases during Olympics qualification starting from November 2018 may lose their Olympic slots or even be banned.

“It is great that all three athletes are qualified. We have sent a letter explaining our situation and told them that the four banned ones had no relation to those who took part in the Olympic qualification. These three are clear of doping and work hard for competitions. It would not be fair if they are sidelined from the Olympics because of others’ mistakes,” Khang was quoted as saying by tuoitre.vn.

“In the coming time, the world governing body may add further fines for these violations,” he added.

Vietnam has secured 13 berths at the Tokyo Games. They are in taekwondo (1), swimming (1), gymnastics (2), boxing (1), archery (2), rowing (1), badminton (2) and weightlifting (3). Meanwhile, one slot each in athletics and boxing will be announced in the coming weeks./.

Three Vietnamese weightlifters to compete in Olympics have 726 words, post on en.vietnamplus.vn at June 15, 2021. This is cached page on Talk Vietnam. If you want remove this page, please contact us.