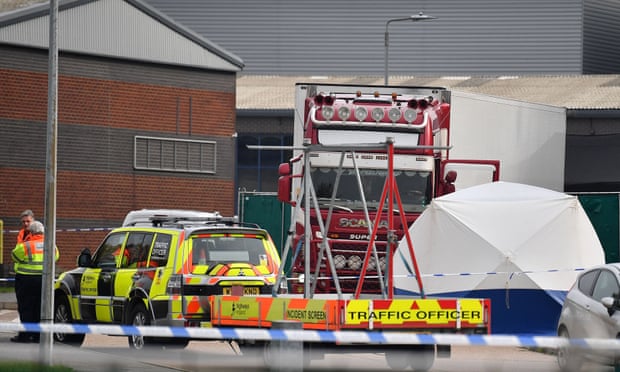 The lorry where the bodies of the 39 Vietnamese citizens were discovered. AFP Photo

HÀ NỘI — A man, thought to be a 'significant' member of the people smuggling gang responsible for the deaths of 39 Vietnamese citizens found dead in a lorry in England in 2019, has been arrested.

The Vietnamese national, who has not been named, was detained by officers from the National Crime Agency at a petrol station in Middlesbrough, the UK, on Thursday.

He is wanted by the authorities in Belgium, who allege he was a member of a network of people traffickers connected to the deaths.

The man is suspected of running safe houses in Brussels where the migrants stayed before embarking on their fatal journey.

A Belgian investigating magistrate issued an arrest warrant in December, suspecting that he was on the run in the UK and had links to the Birmingham area.

Investigators tracked him down to a location in Middlesbrough, in the North East of England, where he was arrested at about 1pm.

He is due to appear in court in London where extradition proceedings will begin.

The National Crime Agency (NCA)'s Head of Organised Immigration Crime Operations, Miles Bonfield, said: "This is another significant arrest in terms of the identifying of those involved in the events which led to the tragic deaths of those 39 migrants.

"The individual detained today is suspected by the Belgian authorities of having played a key role in placing at least 10 migrants inside that lorry.

"Working closely with partners in the UK, Europe and beyond we are determined to do all we can to get justice for the families of those who died, and disrupt and dismantle the cruel organised criminal networks involved in people smuggling."

Earlier this year, seven people were given jail terms totalling more than 92 years for their roles in the events which led to the deaths, including four men who were found guilty of manslaughter. This followed an extensive investigation led by Essex Police and supported by the NCA.

Another Vietnamese national, a man known as Ngô Sỹ Tài, was arrested by the NCA in December 2020.

He is also wanted by the Belgian authorities for his role in smuggling the victims and awaits extradition. — VNS

Police arrest ‘significant’ member of people smuggling gang have 591 words, post on vietnamnews.vn at June 18, 2021. This is cached page on Talk Vietnam. If you want remove this page, please contact us.