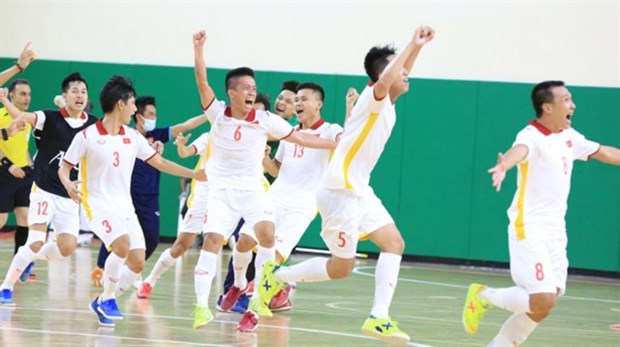 Hanoi (VNS/VNA) – Vietnam will take part in an international four-side futsal tournament in Spain in August in preparation for their World Cup campaign.

The team just completed a 21-day quarantine period in Ho Chi Minh City and returned home on last week after qualifying for the event in the UAE in May.

They will join their club teammates to compete on the second leg of the National Futsal Championship in mid-July if the COVID-19 pandemic is put under control, according to Tran Anh Tu, head of the Futsal Department of the Vietnam Football Federation (VFF).

The national team will have their next training camp in early August. They will have a training course in Spain from August 25. At the tournament, Vietnam will play Japan, Guatemala and the hosts.

Before leaving for the Lithuania World Cup from September 12 to October 3, they are expected to have a game against a leading Spanish club.

The VFF is also in discussions for a friendly match with the Moroccan national team on September 6.

Vietnam will play Brazil in their first group stage match on September 13.

According to the organisers, VAR will be used at this year’s World Cup./.

National futsal team to compete at tournament in Spain have 445 words, post on en.vietnamplus.vn at June 21, 2021. This is cached page on Talk Vietnam. If you want remove this page, please contact us.