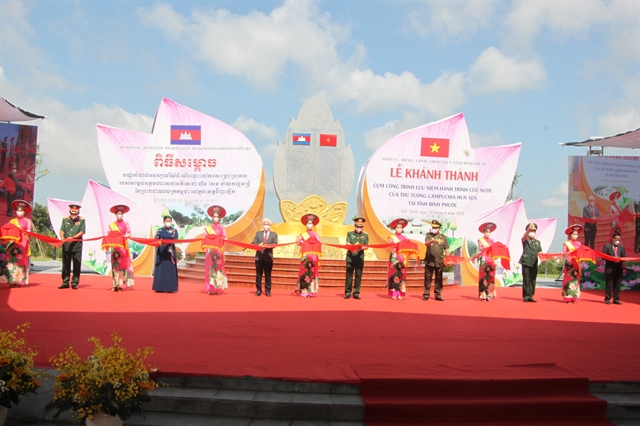 BÌNH PHƯỚC – A memorial complex to commemorate Cambodian Prime Minister Hun Sen’s journey to rescue his country from the genocidal Pol Pot regime was inaugurated yesterday in the southern province of Bình Phước.

According to the Chairman of Bình Phước People’s Committee Trần Tuệ Hiền, the complex will commemorate important events and landmarks where PM Hun Sen first met Vietnamese militia and people in 1977 and with their help started a campaign to overthrow the genocidal regime of Pol Pot, saving millions of Cambodian lives.

Construction of the complex started in May this year. Roads and other infrastructure leading to the complex also received an upgrade, which will boost trade and transportation on both sides of the border.

The complex, which includes an exhibition centre on PM Hun Sen’s campaign, will serve as a symbol of Việt Nam-Cambodia friendship and a monument to sacrifices made by both countries in the fight against Pol Pot’s regime to save the people of Cambodia. – VNS

Memorial complex dedicated to Cambodian PM's national salvation journey opens have 426 words, post on vietnamnews.vn at June 20, 2021. This is cached page on Talk Vietnam. If you want remove this page, please contact us.