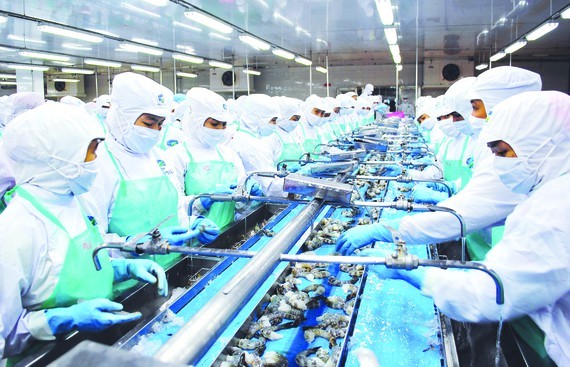 Tran Van Trung, Director of Anh Khoa Seafood Company Limited in Ca Mau Province, said that the prolonged Covid-19 pandemic affected shrimp exports, as some countries controlled imports more strictly. Therefore, goods have to wait a whole month for the host country to take samples for quarantine after being brought to the ports, leading to higher costs.

However, thanks to the initiative and good adaptation, from the beginning of this year to now, the company’s shrimp exports have increased significantly compared to the same period last year. It is expected that the company’s exports will be 2-3 times higher than the previous year.

As one of the longtime enterprises in the shrimp industry, which also faced many difficulties due to the Covid-19 pandemic, Mr. Nguyen Minh Tuan, the representative of Minh Cuong Seafood Processing Joint Stock Company, said that shrimp exports of his company grew fairly well in the first months of this year. Currently, the company tries to maintain production and export and implement strict Covid-19 prevention measures, with the determination not to let the disease enter the factory.

According to the Department of Industry and Trade of Ca Mau Province, by the end of May this year, the province’s shrimp exports were estimated at more than US$423 million, achieving 40 percent of this year’s plan, up more than 16 percent year-on-year. In Bac Lieu Province, the total export turnover of shrimp products in the first five months of this year was estimated at $280 million, up more than 9 percent over the same period. In other provinces in the Mekong Delta, shrimp exports also grew positively compared to the same period last year.

Along with exporting, many shrimp farming households in the Mekong Delta continue to expand production and stabilize their lives. Mr. Pham Van Quan, a farmer in My Long Nam Commune in Cau Ngang District of Tra Vinh Province, said that a few months before, the price of black tiger shrimps sized 30 pieces per kilogram was up to VND200,000-VND220,000 per kg, which now has decreased to about VND170,000 per kg, and that of white-leg shrimps sized 30 pieces per kg is at VND130,000-VND140,000 per kg. At this price level, farmers still ensure profits. 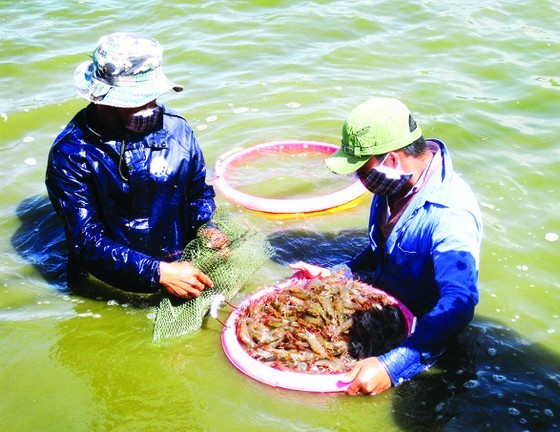 According to the Vietnam Association of Seafood Exporters and Producers, seafood exports reached roughly $790 million in May this year, up 24 percent. Seafood exports in the first five months of this year hit $3.27 billion, up 14 percent year-on-year. Of which, shrimp exports reached $1.33 billion, up 14 percent year-on-year. This is an impressive result at a time when many other agricultural products are struggling with consumption.

Mr. Nguyen Quoc Toan, Director of the Agro Processing and Market Development Authority under the Ministry of Agriculture and Rural Development, said that Vietnamese seafood exports are recovering. Specifically, in the first five months of this year, Vietnamese seafood products had been exported to over 120 markets, with the US, Japan, the EU, China, South Korea, the ASEAN, and Australia being the seafood export markets with the highest value.

As for shrimp products, the advantage is that the global import demand is increasing heavily, especially in large markets. Meanwhile, shrimp supply from some countries, such as India, Thailand, and other suppliers, has been reduced due to the negative impact of the Covid-19 pandemic. Taking advantage of this, Vietnamese enterprises have accelerated shrimp exports in the first months of this year and got good results.

It is forecasted that in the coming time, the US will continue to be a market with good growth for Vietnam’s shrimp products. Vietnamese enterprises also expect to increase shrimp exports to the EU, mainly white-leg shrimps. As for the South Korean market, there are also good signs of recovery and positive economic growth, so seafood trade with Korean enterprises will be more vibrant in the coming time.

Other markets, such as Australia, Canada, the UK, and Russia, will continue to be new potential markets because demand increases and there are no uncertainties or market barriers.

In the past time, freight rates for exported goods and container rental costs have climbed sharply. Along with a shortage of ships, many costs arising from the implementation of Covid-19 prevention measures have caused burdens on exporters, reducing competitiveness with other shrimp exporting countries. Besides, the price of shrimp feed continuously rose to VND800,000-VND900,000 per bag of 20 kilograms, pushing up production costs.

These are pressures on many shrimp farming households in the Mekong Delta, which require reasonable response solutions to ensure the source of raw shrimp for processing in the near future.

Mekong Delta posts positive results in shrimp exports have 907 words, post on sggpnews.org.vn at June 14, 2021. This is cached page on Talk Vietnam. If you want remove this page, please contact us.