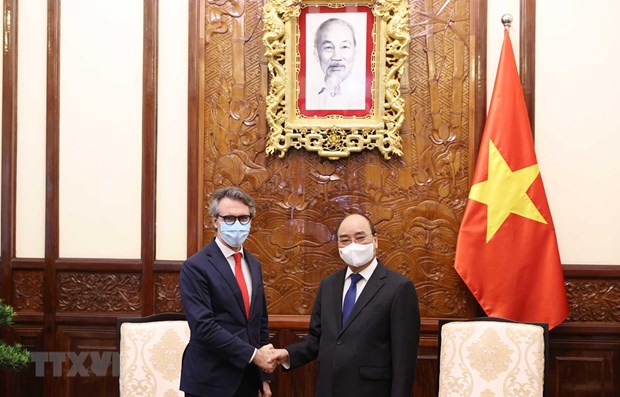 The ambassador applauded Vietnam's efforts in the pandemic fight and expressed his hope that the country will successfully complete its vaccine rollout.

During the reception for Aliberti, the President thanked the EU for its medical support through the COVAX Facility and Team Europe, and called on the EU to help Vietnam enhance its capacity for COVID-19 vaccination and production.

Phuc expressed his delight at the active development of the partnership and comprehensive cooperation between Vietnam and the EU over the past time.

The EU has become a leading important partner of Vietnam in many regards, the President said, adding that the two sides have signed a number of cooperation agreements in politics, trade, investment, and national defence and security such as the EU-Vietnam Partnership and Cooperation Agreement (PCA), the EU-Vietnam Free Trade Agreement, the Framework Participation Agreement (FPA) and the Voluntary Partnership Agreement on Forest Law Enforcement, Governance and Trade.

Such documents have created a firm foundation for the two sides to lift their relations to a new high, Phuc said.

The ambassador, for his part, spoke highly of Vietnam's non-permanent membership of the United Nations Security Council for 2020-2021.

He thanked Vietnam for its support in upgrading the ASEAN-EU relationship to a strategic partnership, and noted his wish that the two sides will continue their cooperation within the framework, for the sake of ASEAN countries and the EU.

While discussing regional and international issues of shared concern, Aliberti emphasised the significance of international law, notably the 1982 United Nations Convention on the Law of the Sea (1982 UNCLOS) to regional peace, stability, cooperation and development.

Phuc asked the ambassador to convey his invitations to the EU's high-ranking leaders to visit Vietnam./.

EU Ambassador willing to help Vietnam access COVID-19 vaccine sources have 536 words, post on en.vietnamplus.vn at June 1, 2021. This is cached page on Talk Vietnam. If you want remove this page, please contact us.