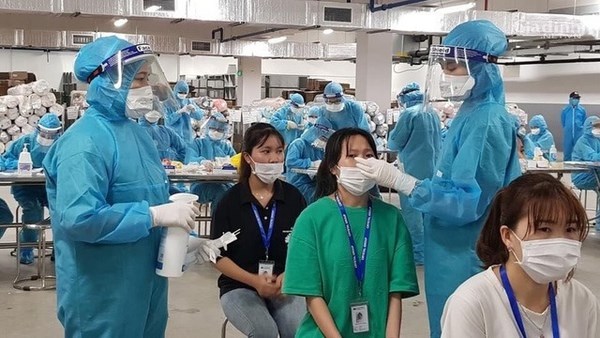 COVID-19 testing among workers in an industrial park. — Photo provided by the Ministry of Health

HÀ NỘI — A total of 158 new cases of COVID-19 were reported in Việt Nam from 6am to noon on Thursday, according to the Ministry of Health.

These included six imported cases who were immediately quarantined on arrival in An Giang and Kiên Giang provinces, and 152 domestically-transmitted infections.

As many as 131 cases were detected in quarantine or locked-down areas.

As of noon on Thursday, the country's total number of infections stands at 9,723, including 8,106 domestic cases and 1,617 imported cases.

There have been 6,536 cases since the latest outbreak hit the country on April 27. The COVID-19 pandemic has claimed 55 lives in Việt Nam so far.

In recent days, the number of COVID-19 cases with unknown sources of infection has been continuously updated by the Centre for Disease Control of HCM City.

These cases came from Hóc Môn, Tân Phú, Bình Tân, Tân Bình and Thủ Đức City and were detected through large-scale testing or hospital screening when their symptoms appeared.

According to the latest report of the HCM City Department of Health, there are at least 38 cases of COVID-19 with unidentified sources of infection, of which eight were detected through large-scale testing in the community, and the remaining 30 cases in hospitals when patients came for screening.

“If not detected and prevented in time, these missing F0s still roam around in the community and push the spread of the disease more and more widely." — VNS

158 cases of COVID-19 reported on Thursday have 503 words, post on vietnamnews.vn at June 10, 2021. This is cached page on Talk Vietnam. If you want remove this page, please contact us.