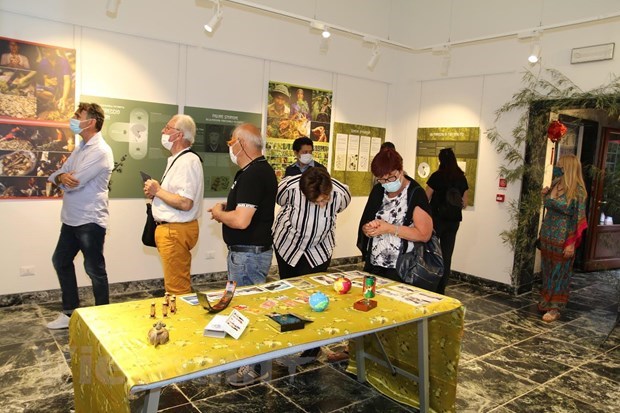 Visitors at the exhibition (Photo: VNA)

Rome (VNA) – An exhibition on biodiversity in Tay Yen Tu Nature Reserve and Vietnamese traditional medicine was held in Italy's Abano Terme city of Padova province on May 29.

The event, held by the Vietnamese Embassy in Italy in coordination with the administration of Abano Terme city and the Italy-Vietnam Friendship Association in Veneto region, drew the attendance of Vietnamese Ambassador Nguyen Thi Bich Hue, representatives from various trade-industry associations and research centres.

Addressing the opening ceremony, Hue said that Vietnam and Italy are now important partners of each other in the fields of politics, economy, defence, culture, tourism, education-training and science-technology.

She said that the Italy-Vietnam Friendship Association in Veneto region is a key factor that has contributed to the enhancement of bilateral solidarity and cooperation.

Within the framework of the Action Plan to realise the Vietnam-Italy strategic partnership in the 2021-2022 period with a vision to 2030, many specific programmes and projects will be jointly implemented in the future, she noted.

Meanwhile, Renato Darsie, a representative from the Italy-Vietnam Friendship Association in Veneto region said that the exhibition is an initiative of the association with the aim of introducing and promoting the image of Vietnam to Italian people.

The event was also expected to raise public awareness in Italy of protection and sustainable use of natural resources, he said.

Through the exhibition, the diverse animal and plant species inhabited in the Tay Yen Tu Nature Reserve were introduced, including many rare species in need of protection.

The event will run until June 1.

Earlier, Hue had a working session with Alessandro Nardo who is in charge of international affairs of the Veneto industry association, and Mayor of Abano Terme Federico Barbierato to seek measures to accelerate trade collaboration between Italian and Vietnamese localities.

The ambassador and the mayor also kicked start the AbanoZen exhibition series on health to resume tourism activities in the city.

Vietnamese biodiversity, traditional medicine introduced in Italy have 441 words, post on en.vietnamplus.vn at May 30, 2021. This is cached page on Talk Vietnam. If you want remove this page, please contact us.