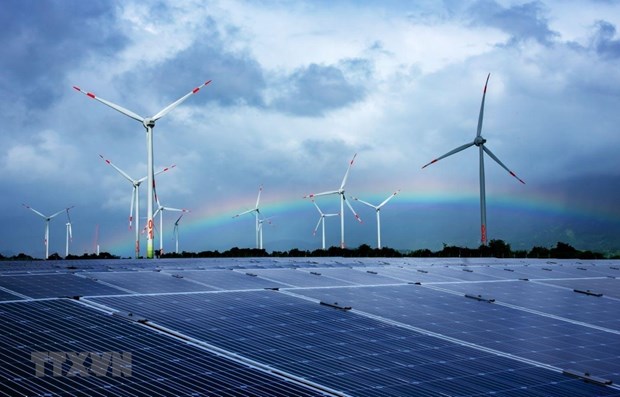 Vietnam now ranks seventh in the world in terms of capacity, according to clean energy research group BloombergNEF. (Photo: VNA)

The Southeast Asian nation now ranks seventh in the world in terms of capacity, according to clean energy research group BloombergNEF, and in 2020 the only countries that installed more solar panels were the US and China, the article said.

"I have never seen a country explode like this in solar," Logan Knox, Chief Executive of Vietnam operations of UPC Renewables, which builds and operates wind and solar farms across Asia, was cited by BNN Bloomberg. "It's almost unbelievable."

Vietnam is an encouraging sign that global efforts to discourage the use of fossil fuels and boost the accessibility of clean alternatives are bearing fruit, the article said.

The government turned to the solar industry a few years ago as a growing number of power shortages threatened to sap its economic momentum. Years of rapid growth meant surging electricity demand from factories built by multinational giants including Samsung Electronics Co . and suppliers for Apple Inc.

A plan to meet that with an ambitious fleet of coal power plants has fallen behind schedule, due in large part to push-back from local leaders concerned about air quality and financing difficulties as global banks stopped lending for the dirtiest energy source.

That same shift to clean energy needs to happen in more developing countries if emissions worldwide are to be zeroed out by mid-century—a timeline needed to avoid catastrophic global warming, the article noted./

Vietnam explodes in solar energy: BNN Bloomberg have 457 words, post on en.vietnamplus.vn at May 20, 2021. This is cached page on Talk Vietnam. If you want remove this page, please contact us.