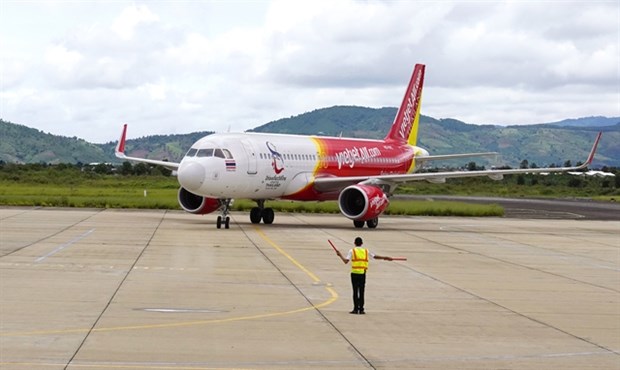 HCM City (VNA) – Vietjet Aviation Joint Stock Company has released its financial results for the first quarter of 2021 with positive indications of recovery.

Vietjet has also transferred all of its owned treasury shares in the first quarter to strengthen its balance sheet and cash flow in support of the air transport sector.

The airline still maintained its efficient cost control through innovative and creative programmes and measures to cut back on expenditures while optimising fleet operations with a 52 percent of cost reduction and a year-on-year decrease of 39 percent of costs for ancillary sale and administration.

Vietjet has transported nearly 3.6 million of passengers on more than 21,000 flights over the first three months of the year. Its On-time Performance (OTP) rate has stayed at the global high of over 90 percent.

Vietjet was one of the first airlines to have fully resumed the domestic flight network and even opened more new routes to meet the increasing travelling demand post-Tet holiday and in the summer. Such routes have helped localities to kick-start their economic recovery .

The airline has also introduced several promotions including the zero Vietnam dong tickets, voucher offerings worth of 100,000 VND and 50,000 VND or a free 20kg check-in luggage.

Apart from passenger transport, Vietjet has come up with different measures to increase the ancillary revenue which now accounts for nearly 50 percent of the airline's total revenue.

Its cargo services have also turned more diverse in terms of product range which was developed closely based on the sentiment of the logistics market in order to meet the mounting cargo delivery demand. In Q1/2021, Swift247 Joint Stock Company, which has 67 percent of shares owned by Vietjet, has launched a new online air cargo services named SWIFT Mega to deliver heavy freight on Vietjet's extensive flight network. In total, Vietjet has transported 18,000 tonnes of freight in the first quarter of 2021.

Paying an extra attention to the safety and health of the passengers and the flight crew, Vietjet has been strictly following the COVID-19 prevention measures of the World Health Organization (WHO), the International Air Transport Association (IATA), aviation authorities and health agencies to help passengers and flight crew stay safe. Vietjet was hailed as one of top 10 safest and best low-cost airlines in the world in 2020 by AirlineRatings. It also received the highest safety ranking of 7 stars regarding COVID-19 prevention measures implemented by airlines.

In the coming months, Vietjet is focusing on digital transformation to maximize its capabilities and operating effectiveness. It is also pushing ahead negotiations with services suppliers for appropriate discounts while proactively looking for alternative sources of revenue like air cargo and extended aviation services. The airline plans to carry out financial investments and projects to ensure its business strategy is done in an effective and sustainable manner.

Vietjet has installed the second flight simulator (SIM) at Vietjet Aviation Academy (VJAA) which is expected to start operating in May, 2021. It will fundamentally increase the VJAA's training capabilities, making it one of the most modern and advanced training facilities in the region for aviation manpower in Vietnam and the world.

Vietjet is expected to kick off a series of technical and physical infrastructure projects plus an investment in a technology park. The airline is stepping up preparations to welcome top aviation experts and activities, aiming to make Vietjet one of the top airlines in the world./.

Vietjet bounces back in first quarter have 752 words, post on en.vietnamplus.vn at May 5, 2021. This is cached page on Talk Vietnam. If you want remove this page, please contact us.