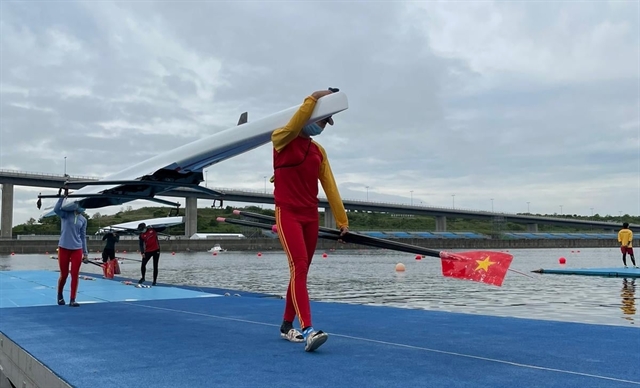 Duo Lường Thị Thảo and Đinh Thị Hảo finished second in the women’s lightweight double sculls with a time of 7 minuted and 17.34 seconds. They were behind Chiaki Tomita and Ayami Oishi of the hosts who finished in 7:15.84. The bronze went to Zeinab Norouzi Tazeh Kand and Kimia Zarei of Iran on 7:23.86.

The top three in double events will qualify for the Tokyo Games, where Thảo and Hảo will compete in their first Olympics.

Their teammate Phạm Thị Huệ was fourth in the women’s single sculls. Her result could have seen her qualify as the top five receiving slots to Tokyo in individual races, however, each country was only allowed to send its highest-placed qualifier to the Games.

On the men’s side, Nguyễn Văn Hiếu failed to make the top five in the single sculls and was sixth with a time of 7:34.11.

More than 75 athletes went to Japan for the tournament which started on May 5 on the Tokyo 2021 rowing course, the Sea Forest Waterway venue.

The Tokyo Games, which was delayed for one year because of the COVID-19 pandemic, is scheduled to take place from July 23 to August 8, with a total of 339 sets of medals across 33 sports.

Việt Nam’s best result in the Games was a gold medal in the men’s 10m air pistol by Hoàng Xuân Vinh at the Rio de Janeiro Games in 2016. VNS

Việt Nam secure seventh Olympic slot in rowing have 486 words, post on vietnamnews.vn at May 7, 2021. This is cached page on Talk Vietnam. If you want remove this page, please contact us.