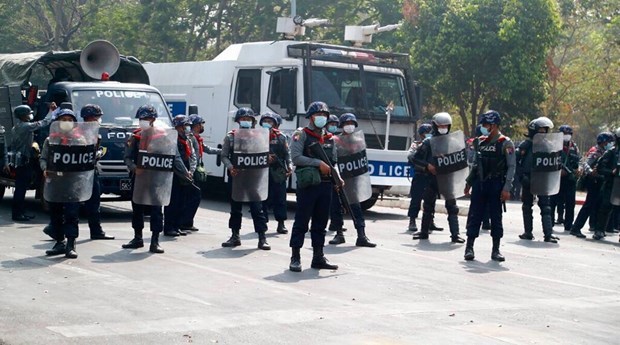 New York (VNA) – All member countries of the United Nations Security Council (UNSC) have appreciated the central role and efforts of ASEAN in promoting the search for a peaceful solution to the Myanmar issue.

At the UNSC's online meeting on the Myanmar situation on April 30 – the last day of the month when Vietnam worked as President of the council, participants said that the outcome of the recent ASEAN Leaders’ Meeting is a positive step and emphasized the need to immediately implement the “Five-Point Consensus” reached at the meeting.

Many continued to express concerns about the use of violence and asked the parties involved to restrain and hold dialogues to resolve the issue. The countries showed their hope that ASEAN and the Special Envoy to the UN Secretary-General will work closely in efforts to promote the search for a peaceful solution to the Myanmar issue, including a dialogue with all relevant parties in Myanmar as soon as possible.

At the meeting, Erywan bin Pehin Yusof, Second Foreign Minister of Brunei – the Chair of ASEAN in 2021, informed participants of ASEAN's efforts to seek a peaceful solution to the Myanmar issue , particularly contents related to the "Five-point Consensus".

Ambassador Dang Dinh Quy, head of the Vietnam Mission to the United Nations, said ASEAN and its member countries, with their own spirits and methods, will maintain efforts to find a peaceful solution to the situation in Myanmar, including the use of all relevant mechanisms and tools to support the nation in a positive, peaceful and constructive manner.

Quy thanked UNSC member states for their support of ASEAN's central role in promoting the search for a peaceful solution to the issue as well as the outcomes of the ASEAN Leaders' Meeting on April 24, especially the Chairman Statement and the "Five-point Consensus".

Parties involved in Myanmar should bear the main responsibility for addressing the issue, he stated, stressing the need to immediately carry out the "Five-point Consensus" through constructive dialogue and practical mediation, in conformity with Myanmar people's will and interests.

The UN, the ASEAN and international partners should assist Myanmar and create a favourable environment for the implementation of the "Five-point Consensus", he stressed.

The Vietnamese representative also called on all parties in Myanmar to end violence and restrain from violent behaviours, and conduct dialogue and reconciliation for its people's interests and for peace and stability in the region.

He also appealed upon the international community to contribute constructively to helping the country prevent violence and facilitate dialogue and reconciliation.

The Ambassador proposed UNSC member states and the international community maintain support for ASEAN’s efforts and stance. He also affirmed his backing for the Special Envoy of the UN Secretary-General and encouraged mutual support in the work of the Special Envoy and ASEAN to promote a comprehensive, cooperative and constructive approach to solve the current crisis in Myanmar./.

UNSC appreciates ASEAN's central role in seeking peaceful solution to Myanmar issue have 564 words, post on en.vietnamplus.vn at May 1, 2021. This is cached page on Talk Vietnam. If you want remove this page, please contact us.