A building in Sơn Trà District is locked down. Photo courtesy of Hoàng Khánh Hưng

CENTRAL REGION — All schools in the central province of Quảng Ngãi were shut down from Thursday afternoon after a local man tested positive for SARS-COV-2 in the morning.

The province said the COVID-19 patient, a 26-year-old man, who visited the New Phương Đông Bar in Đà Nẵng City on April 28, has been isolated at a medical centre in Bình Sơn District since he came in with symptoms on May 5.

The man had close contact with a bar employee who tested positive for the virus in Đà Nẵng.

At least 133 close and indirect contact cases with the man in the province have been taken to quarantine centres for testing and medical checks. 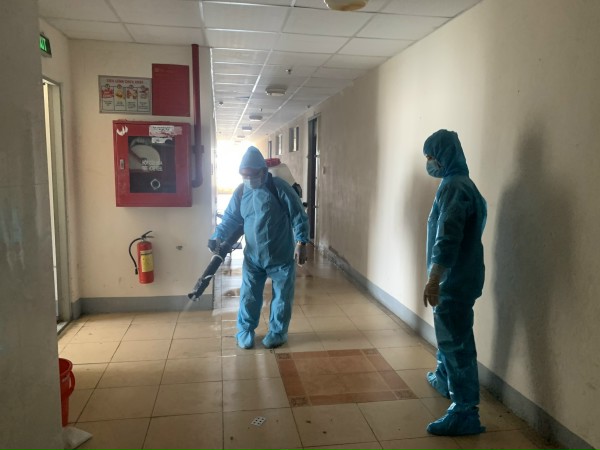 Disinfection begins at every room of a building in Đà Nẵng to prevent SARS-COV-2 infection cases in community. Photo courtesy of Hoàng Khánh Hưng

The province is also preparing to host 240 Vietnamese workers returning from Taiwan on Saturday.

Đà Nẵng has locked down the New Phương Đông Bar on Đống Đa Street and residential areas nearby.

The bar was disinfected on Thursday morning, and at least 250 samples from employees of the bar have been collected for tests.

A building in Sơn Trà District – where the bar employee lives – was also locked down on Thursday.

Thừa Thiên Huế has been tracing close contact cases of the bar employee after she paid a visit to her native village in Lăng Cô on May 4.

Some 800 businessmen and women at Cẩm Lệ market were tested on Thursday morning related to another COVID-19 patient, a massage therapist who was confirmed to be positive on May 4 .

According to the city's Centre for Disease Control (CDC), 1,183 people (close contact cases from Hoàn Mỹ Hospital and Phước Mỹ market) have tested negative for SARS-COV-2 once, and more tests will be needed in the coming days.

More than 1,200 medical workers of the city's General Hospital have been vaccinated, while journalists began receiving vaccines from Thursday. — VNS

Schools in Quảng Ngãi shut down have 456 words, post on vietnamnews.vn at May 7, 2021. This is cached page on Talk Vietnam. If you want remove this page, please contact us.