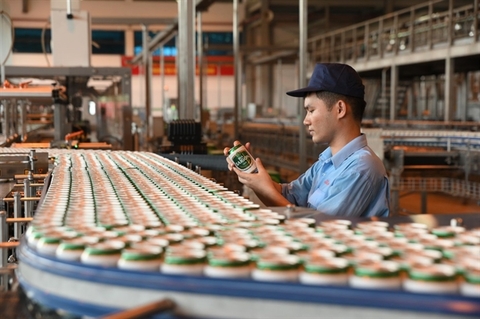 Sabeco’s brewery production line. This year, Sabeco aims to achieve revenue of VND33.49 trillion, up by 20 per cent. — Photo sabeco.com.vn

Viet Nam’s largest brewer Sai Gon Beer-Alcohol-Beverage JSC (Sabeco) earned VND986 billion (US$42.6 million) in post-tax profit in the first quarter of this year, an increase of 37.5 per cent compared to the same period in 2020.

The figures were released in Sabeco's consolidated financial statements for the first quarter of 2021.

Net revenue reached VND5.86 trillion, 19 per cent higher than the same period last year. Gross profit was VND1.7 trillion, up by 26.5 per cent. Gross profit margin improved from 27.6 per cent to 29.2 per cent.

Along with the increase in revenue, selling expenses and administrative expenses increased by 51 per cent and 21 per cent, respectively.

Inventories increased by more than 41 per cent to VND2 trillion. Inventory of finished products increased from VND623 billion to VND1 trillion, up 66 per cent.

Sabeco’s cash and deposits, amount to VND16.35 trillion, accounting for nearly 61 per cent of its asset structure. The company continues to maintain short-term debt of just over VND880 billion.

This year, Sabeco targets revenue of VND33.49 trillion, up by 20 per cent. After-tax profit is expected to total nearly VND5.3 trillion, up 7 per cent compared to 2020. It plans to pay dividend at a rate of 35 per cent in cash.VNS

Sabeco sees profit up 37 per cent have 500 words, post on bizhub.vn at May 4, 2021. This is cached page on Talk Vietnam. If you want remove this page, please contact us.