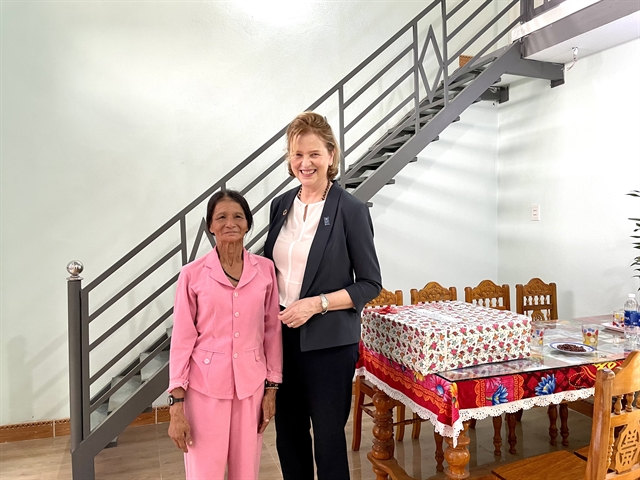 QUẢNG NAM – The skinny woman trembled, seemingly unable to stand still because of her happiness to receive a house thanks to the work of the United Nations Development Programme (UNDP) in Việt Nam and local people's generosity.

She was one of the thousands of people who lost nearly all of their assets due to the storms of 2020 in central Việt Nam.

Her husband died when she gave birth to her fourth child 16 years ago, so Phương alone raised her four small children.

"Life is so hard. I work alone in the field as a hired labourer to support these children," she said.

Now, her two eldest daughters have their own families and work in a local factory. However, her two sons have health problems, so they still live at home and can only work as hired labourers around the commune.

In the new two-storey house, she reserved the most solemn area on the second floor as an altar for her husband. On the first floor, she presented a set of wooden tables and chairs bought from money saved by children.

"I give my thanks to the UNDP, the provincial People’s Committee and the Red Cross. Without this support, I don’t know when we would have been able to build such a house,” she said.

“I will pick up local neighbours to live at my house if there are floods and storms in this area,” she added.

The house with a ground area of 16sq.m and worth VNĐ110 million (US$5,000) was one of more than 430 storm-resistant houses provided by the UNDP in five provinces in central Việt Nam.

This assistance activity is part of the project ‘Responding to natural disasters in Việt Nam’ funded by the United Nations Central Emergency Response Fund (CERF).

At the end of April, the UNDP handed over 10 houses to people in Quảng Nam Province as part of the UNDP's 2021 plan to build flood-resistant houses.

In addition to building more than 430 new houses, the UNDP in collaboration with the People’s Committees of central provinces that suffered heavy damage in the storms last October (Quảng Bình, Quảng Trị, Thừa Thiên-Huế, Quảng Nam and Quảng Ngãi) and the Red Cross completed the repairs and reinforcement of more than 3,300 damaged houses.

Some 3,300 household kits have also been provided to poor households. Household items, including kitchen equipment, blankets, curtains, personal protective equipment, and chemical disinfectants were all necessary for people to get back on their feet.

UNDP Resident Representative in Việt Nam, Caitlin Wiesen, said that more than ever, affected people, especially the poor, women and girls were in need of safe houses and essential items to deal with the damage.

"Our safe homes have saved thousands of people during the historic floods and storms that devastated central Việt Nam," she said.

"However, there is still a long way forward to be able to assist those in need of safe homes."

Trần Văn Tân, Deputy Chairman of the Quảng Nam Provincial People’s Committee, said there were still many poor households, lonely mothers and disabled people suffering difficulties in life and some had lost their homes in last year's floods.

“This makes the poor, who already struggle so much, in even greater difficulties without community support."

Tân said the local authorities appreciated the UNDP’s efforts and timely support to build and repair the houses.

"It is very practical and meaningful support for local people. We hope to continue to receive this support so that people living in areas affected by storms and floods have a warmer life," he said.

At a house handover ceremony at Quế Thuận Commune last week,   Nguyễn Văn Tiến, Deputy Chief of the Standing Office of the Central Steering Committee for Disaster Prevention and Control, said: "I appreciate the co-ordination of UNDP that help people in the disaster area.

“This assistance not only solves immediate post-disaster recovery but is also sustainable for local residents living in frequent disaster areas such as central Việt Nam.”

"In particular, our safe homes in Lý Sơn Island will have a new design and enhanced resistance to special wind conditions, and rooftop solar systems are capable of providing sufficient lighting systems for households," said  Wiesen.

Central Việt Nam was battered by strong storms and floods last October. According to the Central Steering Committee for Disaster Prevention, more than 230 people were killed or went missing. At least 380,000 houses were flooded, damaged or collapsed. VNS

Quảng Nam’s flood-hit residents receive new houses have 1116 words, post on vietnamnews.vn at May 4, 2021. This is cached page on Talk Vietnam. If you want remove this page, please contact us.