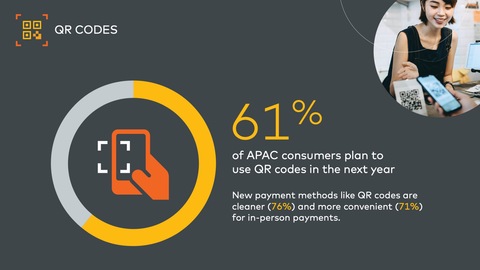 QR codes have gained particularly strong traction in APAC compared to the rest of the world. — Infographic Mastercard

As a result of the pandemic, 94 per cent of people in the Asia Pacific region (APAC) said they will consider using at least one emerging payment method, such as QR codes, digital or mobile wallets, installment plans, crypto currencies, biometrics and others, in the coming year.

These are the main findings from the Mastercard New Payments Index conducted across 18 markets globally, which reveals that 84 per cent of consumers in APAC already have access to more ways to pay compared to one year ago. Of note for entrepreneurs, 74 per cent of respondents said that they would shop at small businesses with greater frequency if they offered additional payment options.

"Consumers in Asia Pacific have already gained recognition globally for their openness to new technologies and innovation, and these findings confirm that this trend is only set to continue as more digital payment options rapidly become main stream in this part of the world."

Looking ahead, the use of a range of payment technologies is trending upwards as people's comfort with and understanding of them increases – while the use of cash steadily decreases. In fact, in the coming year, 69 per cent of respondents in APAC say they plan to use cash less frequently. Meanwhile, digital or mobile wallets have gained significant popularity amongst consumers in APAC, with 68 per cent of respondents anticipating using this type of payment in the next year, higher than the global average of 62 per cent.

"This behaviour shift is reinforced by people's desire for choice – with 85 per cent of consumers in APAC saying that they expect to make purchases when they want and how they want. Businesses that can provide multiple ways to shop and pay will be best positioned to meet the unique needs of this moment that are shaping the future of commerce for years to come," added Malhotra.

The survey also revealed that 84 per cent of consumers in APAC have seen their access to emerging forms of payments increase in the past year alone. QR codes have gained particularly strong traction in APAC compared to the rest of the world. Of those who used QR codes for payment, 63 per cent said they used them more frequently in the last year than they had in the past.

A recent study on 5,500 major Mastercard merchants showed that between Q1 2020 and Q1 2021, more than a fifth of these merchants globally increased the number of ways they connect with consumers, either by enabling an e-commerce channel or accepting contactless transactions. Mastercard also saw the total number of card-not-present transactions grow by over 30 percent globally while more than 100 markets saw contactless as a share of total in-person transactions grow by at least 50 per cent. — VNS

Pandemic changes spending habits in Asia Pacific have 609 words, post on bizhub.vn at May 6, 2021. This is cached page on Talk Vietnam. If you want remove this page, please contact us.