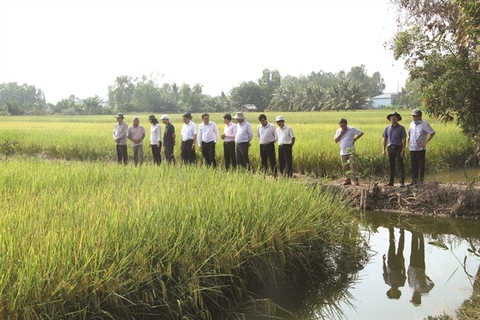 Over the past three years, Kien Giang Province, the Mekong Delta's largest rice producer, has restructured cultivation methods on more than 24,000ha of rice fields to adapt to climate change and improve farmers’ incomes.

The farmers, who had typically planted two or three rice crops a year, switched to either rotating the cultivation of rice and shrimp or intercropping rice and shrimp. Some farmers rotated rice and other crops, and others switched completely from rice to growing fruit or other crops, or engaging in aquaculture.

The Secretary of the Kien Giang Party Committee, Do Thanh Binh, said: "These measures have increased production value of these fields by 35 per cent."

All of the delta's 12 provinces and its major city, Can Tho, have been able to turn more unproductive rice fields into fruit tree and other crop growing areas, or for aquaculture.

These measures were taken after Government Resolution 120 was issued in 2017, which called for sustainable and climate-resilient development in the delta.

When Viet Nam was reunified in 1975, the country's economy was one of the poorest in the world and it could not produce enough rice for domestic consumption.

After 1986, when the doi moi (renewal) period of economic and political reform began, the delta began to develop rice production rapidly after the Government invested in large irrigation projects such as man-made canals and flood-prevention dykes with an aim to ensure food security.

With the delta's rice production increasing, Viet Nam started to have a rice surplus for export in 1989, and two years later the country became one of the world's top three rice exporters.

However, in the last 10 years, the delta has been facing the impact of extreme weather, river and coastal erosion, saltwater intrusion, pollution, and lack of fresh water because of climate change and human factors, affecting the livelihoods of millions of people.

After record-high saltwater intrusion in the 2015-16 dry season damaged more than 300,000ha of rice, the Government issued Resolution 120 calling for the delta's sustainable development to 2100.

The resolution pointed out that climate change and rising sea levels were inevitable and that delta residents must adapt to challenges by turning them into opportunities and restructure agricultural production based on "nature-based development".

To meet market demand and achieve higher production value, the resolution said that the order of importance of crops in the delta should be changed to seafood, fruit and rice, rather than rice, seafood and fruit.

Speaking at the third conference on sustainable and climate-resilient development of the delta held in Can Tho last month, then MARD Minister Nguyen Xuan Cuong said that agricultural production and exports had changed significantly in the delta and farmers’ lives had improved.

Agriculture exports from the delta increased from US$7 billion in 2016 to $8.8 billion last year.

"This figure shows that ‘nature-based development’ is not only the right orientation but also is effective," he said.

The Mekong Delta is one of six deltas in the world that are severely impacted by climate change. Its coastal areas are affected by saltwater intrusion from the sea through river mouths in the dry season, while its upstream areas are usually inundated in the rainy season with floodwaters caused by the rising levels of the Mekong River. 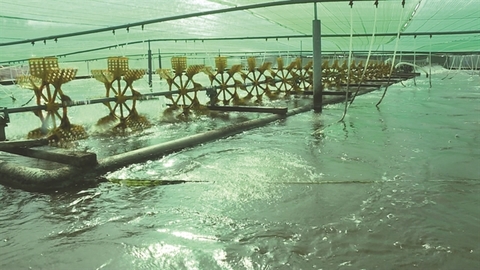 In the delta's upstream provinces like Dong Thap and An Giang, farmers have reduced the area for rice cultivation during the flood season and have released floodwaters into rice fields for use in aquaculture and to fertilise the soil, and destroy pathogens and pests.

Last year, farmers in Dong Thap grew the autumn-winter rice crop, the year's third rice crop, on only 138,000ha, which was 9,000ha less than before. They instead released floodwaters into these unused rice fields.

Le Anh Tuan, deputy head of the Can Tho University's Research Institute for Climate Change, said that most localities in the delta had restructured agricultural production by considering the available water resources and the effects of climate change.

For instance, farmers no longer grow three rice crops a year and had reduced rice-growing areas in coastal areas. They had switched to farming models such as rice – shrimp, rice – fish, or shrimp – forest in coastal areas.

The cultivation of the delta's new high-quality rice varieties like ST 24 and ST 25, which rank among the world's best rice varieties, is now being expanded in the rice – shrimp farming model.

Other environmentally-friendly farming models that use advanced techniques and efficient irrigation facilities have also been broadened in the delta. These include cultivation of vegetables in net houses, hydroponic vegetables, smart rice farming, organic rice farming, and super-intensive shrimp farming.

In Ca Mau Province, the delta's largest shrimp producer, areas for super-intensive shrimp farming rose to 2,800ha last year, up 12 per cent against 2019, and are expected to increase to 3,200ha this year, according to the provincial Department of Agriculture and Rural Development. 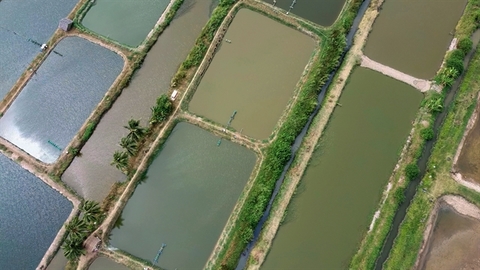 According to Le Thanh Trieu, director of the department, Ca Mau plans to use advanced techniques in shrimp breeding to improve yield, quality, efficiency, food safety and environmental protection.

The delta's largest fruit-producing province, Tien Giang, which has more than 80,100ha of fruit, has established many large concentrated fruit-growing areas.

In the ongoing off-season durian harvest, farmers in Tien Giang have had an average yield of 20 tonnes per hectare and are selling the fruit at a higher price of VND90,000 ($3.9) a kilogram, according to the province's Department of Agriculture and Rural Development. 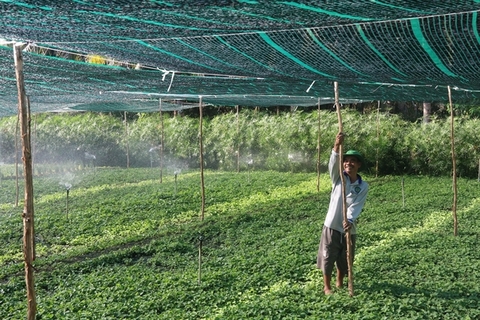 For the 2020-21 winter-spring crop, the delta has a total of 160,000ha of large-scale rice fields in which farmers have pooled their rice fields and signed contracts with rice trading companies to guarantee outlets and stable prices.

The production cost of large-scale rice fields is 10-15 per cent less than normal fields, and the profit is VND2.2-7.5 million ($94-323) per hectare higher than those fields, according to MARD.

For the 2020-21 winter-spring rice crop, the Trung An Hi-Tech Farming Joint-Stock Company in Can Tho signed contracts with farmers to grow rice on 1,400ha of large-scale fields without using chemical pesticides.

he General Director of Trung An, Pham Thai Binh, said: "To develop rice cultivation sustainably, linkages among farmers and rice companies should be tightened to produce high-quality rice for export."

Farmers in the delta sell their products mostly to traders and often face unstable outlets and prices.

Vo Tong Xuan, rector of Nam Can Tho University, said that farmers in the delta who switched from rice to other crops had faced difficulties finding outlets.

"When the delta is rezoned, we should identify which area will grow which crop, and with this zoning plan, we will create linkages among farmers in co-operatives, which will work with processing companies to secure outlets," he said. 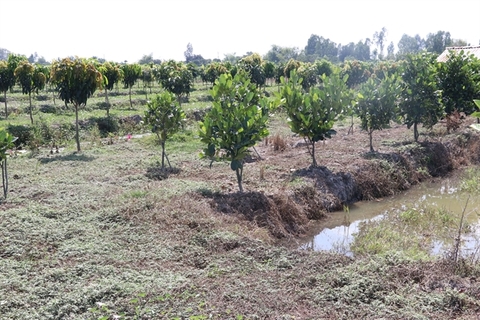 To develop sustainable production, the region also needs more linkages among its provinces and Can Tho to make farm produce on a large scale for export, and to better manage water resources for crop cultivation and aquaculture production, local authorities have said.

In the three years after Resolution 120, the Government has invested in many key infrastructure projects in the delta, such as bridges, roads, fishing ports, sea dykes and irrigation works. 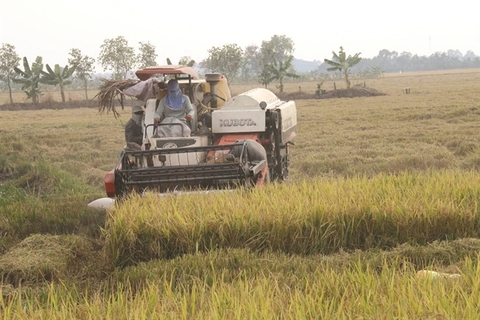 The delta's provinces and Can Tho have also invested in many irrigation projects, reservoirs, and saltwater prevention works.

The development of irrigation projects and the proper restructuring of crop cultivation and preventive measures have helped the delta minimise damage from saltwater intrusion and natural disasters, according to MARD.

In the 2020-21 winter-spring rice crop, farmers in the delta harvested an average yield of 7 tonnes per hectare, the highest in the past five years, and earned 45 per cent profit, according to MARD. 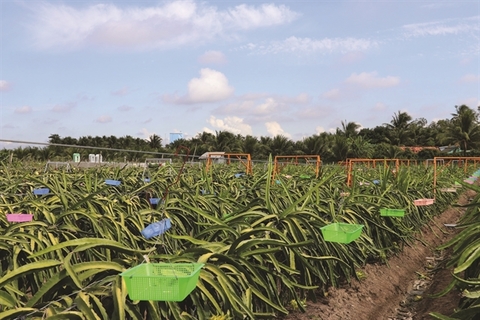 Le Thanh Tung, deputy head of MARD's Plant Cultivation Department, said the delta had properly readjusted the proportion of planted rice varieties and the cultivation of rice and other crops, and reduced the areas under the winter-spring rice crop in places with water shortages.

"Though saltwater intrusion has been more severe this year, there has been no damage to rice and other crops," he said. 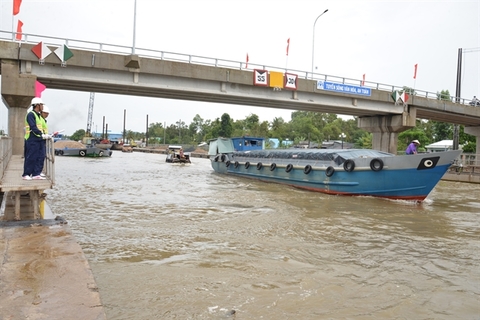 The Mekong Delta needs about VND198.8 trillion (US$8.57 billion) to develop transport infrastructure in the 2021-25 period, according to the Ministry of Transport.

The ministry has petitioned the Government to allocate the delta at least VND57.3 trillion ($2.47 billion) to invest in key transport infrastructure projects like expressways and large bridges, and the upgrading of some national highways during the period.

It plans to call for private investment in other transport projects in the delta, including the Tran De deep-water seaport in Soc Trang Province accessible to vessels of up to 100,000 tonnes.

The delta lacks a well-connected transport system as well as logistic centres, warehouses and a deepwater seaport, which has led to higher costs for logistic services for export.

The region exports 17-18 million tonnes of rice, seafood and fruit a year, and 70 per cent of the goods have to be transported to seaports in HCM City and Ba Ria-Vung Tau Province for shipping overseas, which has increased transport costs by 10-14 per cent, according to the Sai Gon Newport Corporation. – VNS

'Nature - based' farming a winner in Delta have 2207 words, post on bizhub.vn at May 2, 2021. This is cached page on Talk Vietnam. If you want remove this page, please contact us.