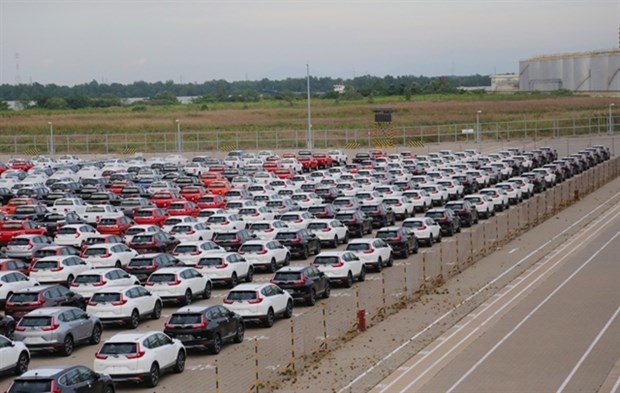 Hanoi (VNS/VNA) – More than 1.1 billion USD was spent on importing 49,360 completely built-up (CBU) vehicles in the four months of 2021 in Vietnam, a surge of 55.2 percent in volume and 57.2 percent in value over the same period last year, the General Statistics Office (GSO) has reported.

In April alone, 14,000 automobiles worth 292 million USD were imported. However, the import turnover of CBU vehicles in April declined against the previous month.

In March, the import of automobiles increased dramatically as more than 347 million USD worth of CBUs were brought into the country.

Industry insiders said these figures could be seen as a positive signal as the local car market continues to struggle with the impact of COVID-19.

A report from the Vietnam Automobile Manufacturers' Association (VAMA) revealed that the total sales figure in the domestic automobile market in the first quarter this year reached 70,925 units, or a year-on-year increase of 36 percent.

Industry insiders attributed the surge to the increasing demand for transport and private use after the economy stalled due to the COVID-19 pandemic.

In March alone, auto sales by VAMA members grew by 127 percent against February to 30,935.

Sales of domestically-assembled vehicles rose 99 percent month-on-month to 70,952, while those of completely-built-up (CBU) vehicles increased 177 percent against January to 13,795./.

More than 1.1 billion USD spent on car imports in four months have 360 words, post on en.vietnamplus.vn at May 7, 2021. This is cached page on Talk Vietnam. If you want remove this page, please contact us.