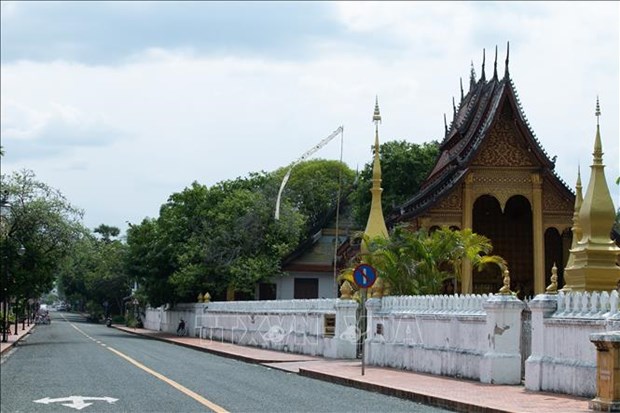 A deserted street in Laos during a lockdown to curb the spread of COVID-19 (Photo: Xinhua/VNA)

Vientiane (VNA) – Laos reported a decline in the daily number of new COVID-19 cases which stood at a double-digit figure for the past five days.

In a statement released in the afternoon of May 1, the country's Ministry of Health said that 64 new cases were detected during the past 24 hours in four provinces nationwide, of them 49 were in Vientiane.

All 18 Lao provinces are under lockdown until May 5. The country to date has logged 821 cases, with 773 of them being reported from the start of April.

The Department of Communicable Diseases Control at the Laos ' Health Ministry announced that as many as 38 Vietnamese people in Thatluang in downtown Vientiane tested positive once with the coronavirus SARS-CoV-2 on April 30.

The Embassy of Vietnam has sent staff members to assist the citizens and local agencies with contact tracing.

The Embassy also asked the Lao side to further support the infected and called on Vietnamese citizens to remain calm and cooperate with Vietnamese and Lao agencies to surmount difficulties.

On May 1, Cambodia documented 388 new COVID-19 cases, which shrunk by half of the figure on the previous day.

A large-scale inoculation drive for about 500,000 people in the high-risk area in Phnom Penh was launched on the same day./.

Laos, Cambodia see lesser new COVID-19 cases have 319 words, post on en.vietnamplus.vn at May 1, 2021. This is cached page on Talk Vietnam. If you want remove this page, please contact us.