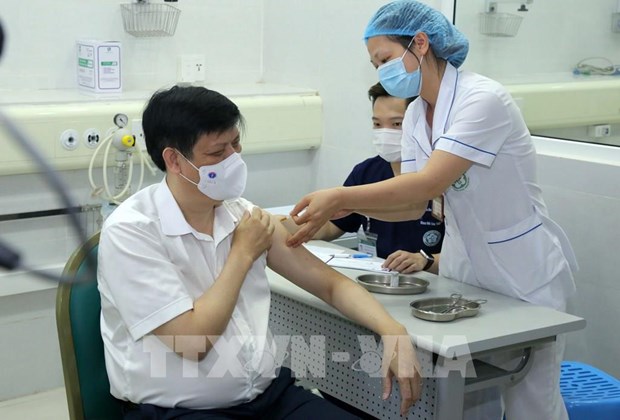 Hanoi (VNA) – Minister of Health Nguyen Thanh Long, his deputies and leaders of units at the Ministry of Health received COVID-19 AstraZeneca vaccine shots on May 6 morning at the Hanoi-based Bach Mai Hospital.

Long, 54, along with three of his deputies – Tran Van Thuan, 51, Truong Quoc Cuong, 60, and Do Xuan Tuyen, 55 – remained at the hospital after the inoculations for follow-up health monitoring. All of them said they felt fine after receiving the injections.

The minister said the global vaccine sharing scheme COVAX is expected to deliver another 1.6 million doses of AstraZeneca to Vietnam on May 10, as part of the commitment to supply some 39 million doses within 2021 and early 2022 to inoculate the prioritised groups as identified by the Government.

When the supplies are more available, eligible people could include students and workers sent overseas.

Long said that the 74 percent of the nearly 1 million doses of AstraZeneca – more than 800,000 from COVAX brought to Vietnam on April 1 and more than 117,000 purchased from the manufacturer that arrived late February – have been administered, and the doses could be finished within a few days.

According to a report released on May 6 morning by the National Expanded Programme on Immunisation, more than 90,000 people were vaccinated on May 5.

In total, 675,956 people in 48 cities and provinces of Vietnam – primarily frontline workers and medical staff – have been inoculated.

Some 16 percent of the 600,000 vaccinated people reported typical symptoms post-injection which usually disappear within 24 hours, Long said, adding that this ratio is lower than in other countries, while other more severe reactions have been dealt with.

He said: "We always stressed the need to ensure safe vaccination. Therefore, the Ministry of Health has established a Steering Committee for safe immunisation, which brings together leading experts and professors in all relevant fields to be ready to assist localities in handling any situation arising during the vaccination drive."

The fourth deputy health minister, Nguyen Truong Son, who just returned from the trip bringing Vietnamese medical supplies aid and experts to help Laos battle their wave of infections, is currently under quarantine after coming into contacts with a doctor at the National Hospital of Tropical Diseases found positive to the virus. His latest COVID-19 test on May 5 was negative./.

Health minister and deputies receive COVID-19 vaccine shots have 568 words, post on en.vietnamplus.vn at May 6, 2021. This is cached page on Talk Vietnam. If you want remove this page, please contact us.