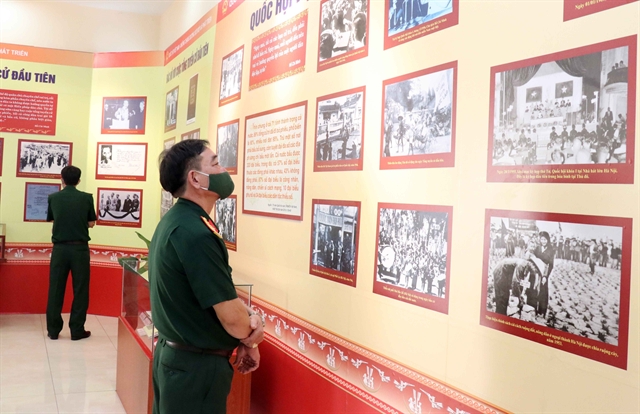 A visitors wearing mask is seen at Việt Nam's National Assembly — Paths of Innovation and Development exhibition that is being held at the Military Zone 7 Museum, HCM City. The exhibition will run until the end of May. — VNA/VNS Photo Nguyễn Xuân Khu

HCM CITY — Photos and documents that reflect the innovation and development of Việt Nam's National Assembly over the years are on display at an exhibition in HCM City.

It is being held at the Military Zone 7 Museum located at 247 Hoàng Văn Thụ Street, Tân Bình District.

The more than 200 exhibits are divided into three themes — ‘President Hồ with the First General Election’, ‘Historic Paths of Việt Nam’s National Assembly’ and ‘The Armed Forces of Military Zone 7 Live and Follow the Constitution and Laws’.

They also reflect the leadership of President Hồ Chí Minh in the establishment and development of the National Assembly.

Speaking at the opening ceremony, Colonel Thái Thành Đức, deputy chairman of the Political Department of Military Region 7, said the exhibition is a practical activity with profound political education significance.

"It is a campaign and a widespread democracy activity that enables generations of Vietnamese people, particularly the youth of the armed forces in Military Region 7, to understand and feel proud of the National Assembly in the journey of building and developing the country of the people, by the people and for the people," he added.

The exhibition will last until the end of this month. Entrance is free. VNS

Exhibition showcases the development of National Assembly have 495 words, post on vietnamnews.vn at May 7, 2021. This is cached page on Talk Vietnam. If you want remove this page, please contact us.