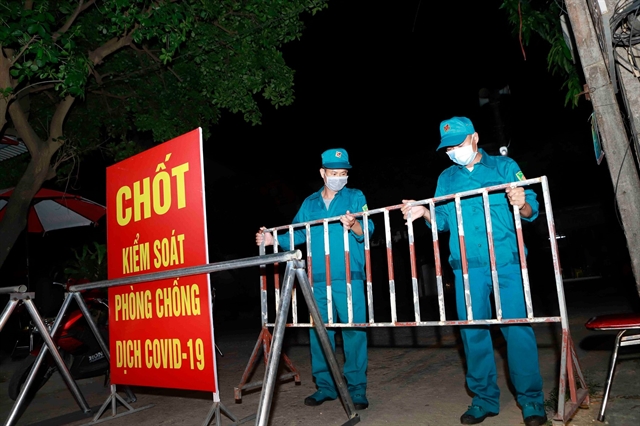 VĨNH PHÚC — Eight people in the northern province of Vĩnh Phúc tested positive for SARS-CoV-2 once early on Wednesday, according to the province's Steering Committee for COVID-19 Prevention and Control.

To date, 14 people in the province have been confirmed as COVID-19 patients.

Local authorities have taken 2,845 testing samples, of which, they found eight positives for SARS-CoV-2 once. The positive samples will be sent to the labs of central hospitals for verification to be recorded as a confirmed case.

The provincial People's Committee chairman Lê Duy Thành at a meeting on early Wednesday asked the province’s Health Department to add more staff and equipment to speed up the testing.

All F1 cases in the province were expected to get tested on Wednesday.

The provincial People's Committee chairman allowed chairpersons of People's Committees of districts to decide the opening of quarantine areas. Agencies and departments will arrange funds for pandemic prevention and control.

Hà Nội on Wednesday morning also confirmed a COVID-19 community infection – a 32-year-old woman who travelled to Hà Nội from Đà Nẵng on the same flight as the two Chinese experts on April 29.

At least four passengers on that flight have been confirmed to get COVID-19 so far.

Meanwhile, in the southern province of Đồng Nai, the province's Centre for Disease Control reported last night one woman who works with a confirmed COVID-19 case in Đà Nẵng tested positive to SARS-CoV-2 once.

The woman works at New Phương Đông Bar in Đà Nẵng. On the morning of May 3, she took flight VN113 from Đà Nẵng to HCM City's Tân Sơn Nhất Airport and then caught a coach from the airport to Long Khánh City. — VNS

Eight people in Vĩnh Phúc, one in Hà Nội test positive for COVID-19 have 677 words, post on vietnamnews.vn at May 5, 2021. This is cached page on Talk Vietnam. If you want remove this page, please contact us.