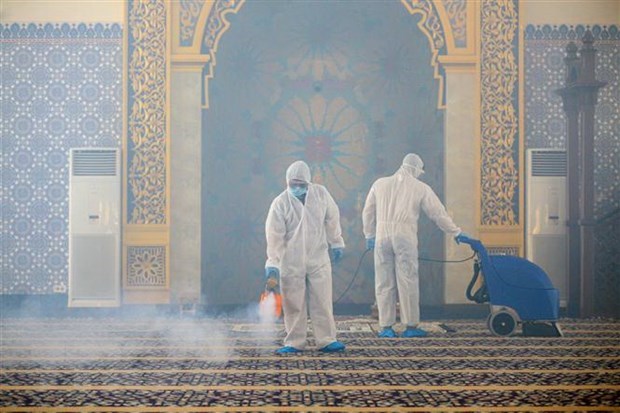 In Bandar Seri Begawan, Brunei on March 17 (Photo: AFP)
Hanoi (VNA) – The COVID-19 pandemic continues to ravage many Southeast Asian countries, with the exception of Brunei which on May 6 marked one year free from COVID-19 transmission in the community.

Brunei reported the first case on March 9, 2020, and has so far recorded 228 infection cases, 219 of them having recovered and three died.

The country launched a vaccination drive on April 3 this year and as of May 5, 17,776 people out of Brunei's population of 450,000 had been vaccinated.

Meanwhile, Indonesia on May 6 began imposing a travelling ban across the country in an effort to contain SARS-CoV-2 during Eid al-Fitr celebrations, when millions normally travel to mark the end of the Islamic fasting month.

The country has to date logged 1.69 million infections and more than 46,300 deaths related to the disease, a record in Southeast Asia.

The same day, Thailand confirmed a mass vaccination programme for around 3 million foreigners living in the country.

With a population of nearly 67 million plus three million foreigners, Thailand needs to inoculate some 50 million people to achieve community immunisation.

In the past 24 hours, Thailand announced 1,911 additional cases and 18 deaths, bringing the total infections and fatalities to 76,811 and 336, respectively.

Meanwhile, the total count of COVID-19 cases in Laos rose to 1,177, after 105 new cases were reported on May 6. It is one of a few countries to have no death caused by the pandemic so far.

At a press conference on May 5, Lao Prime Minister Phankham Viphavan announced the extension of lockdown in Vientiane till May 20.

In the morning of May 6, Cambodian authorities lifted the lockdown of Phnom Penh and Ta Khmao city.

The Cambodian Health Ministry confirmed 650 new infections on the day, bringing the total to 17,621 cases, of which 6,843 have recovered and 114 died.

As of the same day, over 1.5 million people, equivalent to 15 percent of Cambodia's population, had been vaccinated.

COVID-19 still complicated in Southeast Asia have 486 words, post on en.vietnamplus.vn at May 7, 2021. This is cached page on Talk Vietnam. If you want remove this page, please contact us.