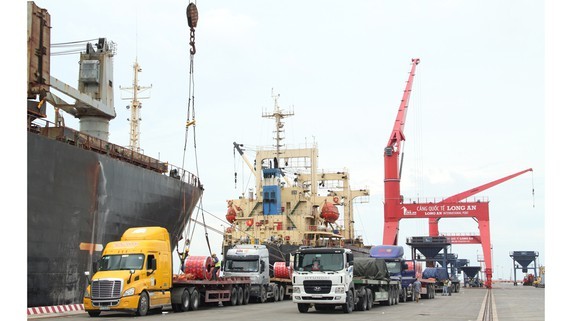 Can Giuoc District is home to Long An international Port with many potentials. (Photo: SGGP)
Exploiting well the advantages

Can Giuoc is only about 20 kilometers from the center of Ho Chi Minh City. Besides the increasingly completed road traffic routes, there is also the Can Giuoc river route that connects the Mekong Delta provinces with Ho Chi Minh City and the Soai Rap River passing through Can Giuoc District to the East Sea. With the completion and operation of the waterway system from Can Gio Ferry Terminal connecting Can Giuoc with Ho Chi Minh City, and the Long An International Port with nearly 100 vessels docking every day, Can Giuoc has been turned from a difficult countryside in every way to become a land full of potential.

The People’s Committee of HCMC has just approved the urban planning of Hiep Phuoc Port in Nha Be District to become one of the five satellite towns of the city. Meanwhile, the current regional planning project also identifies that three districts, including Ben Luc, Can Giuoc, and Duc Hoa of Long An Province, will be the satellite towns of HCMC and develop in parallel. In early 2020, Can Giuoc District welcomed five more key industrial clusters, with a total scale of more than 260 hectares in Phuoc Vinh Dong and Tan Tap communes. Statistics show that over the past 10 years, Can Giuoc District has realized its advantage when it has become one of the localities with the highest growth rate in the fields of industry, commerce, and services in Long An Province.

Mr. Nguyen Tuan Thanh, Chairman of the People’s Committee of Can Giuoc District, said that projects to promote investment and development of key economic regions, along with several infrastructures and technical works that have been implemented, such as Long An International Port, the Ring Road 4, the axis road from HCMC to Tien Giang Province, and the cooperation program with neighboring localities, have created favorable conditions for Can Giuoc District to make a breakthrough. By March this year, the provincial People’s Committee had approved the investment policy of 90 projects of industrial parks, industrial clusters, urban areas, residential areas, and services, with a total area of over 3,700 hectares in Can Giuoc District.

With the existing potentials and strengths of Can Giuoc, many large enterprises do not hesitate to invest in the district. Mr. Vo Quoc Thang, Chairman of the Board of Directors of Dong Tam Group, confided that they invest in Long An International Port to become a locomotive for the local logistics development. Not only that, the company and some others are cherishing the project “Container Barge”. With a dense river network, when this project is implemented, it will form a waterway transport system connecting the Southern key economic region, stimulating comprehensive development for the future of not only Long An Province and the Mekong Delta, but also the whole country.

Mr. Bui Dao Thai Truong, Deputy CEO of Roland Berger in Southeast Asia cum CEO of Roland Berger Vietnam, said that the establishment of Long An Economic Zone in Can Giuoc District and a part of Can Duoc District with a total area of over 32,000 hectares, is very appropriate. The East borders Nha Be District of HCMC and the Soai Rap River, the West borders Provincial Road 826 and Provincial Road 833B, the South borders the Vam Co River, and the North borders Binh Chanh District of HCMC, Long An Economic Zone has advantages in the location and the scale to make use of the FDI capital from other countries, with the land-use demand highly increasing.

"This will be one of the largest economic zones in the South, built on the foundation of existing high-tech and industrial zones. At the same time, it is an appropriate time to catch the general trend, which is to move and expand to Southeast Asia. Thanks to its strategic location and abundant land fund, this economic zone can become a “super economic” zone, connecting important domestic and foreign regions,” said Mr. Bui Dao Thai Truong.

Mr. Nguyen Van Duoc, Secretary of the Party Committee of Long An Province, acknowledged that the province is boldly aiming at the establishment of a high-tech economic zone in the area, attached with the construction of a smart city following the model of South Korea, to create a place to attract and incubate high-tech projects. Currently, Long An is focusing on administrative reform, improving investment and business environment, and enhancing competitiveness. Especially, the province is calling for investment in warehousing and logistics services at the Long An international Port, with an estimated capital of US$455 million through the form of joint ventures and direct investment.

Long An Province has 28 industrial zones and 32 industrial clusters in Can Giuoc, Duc Hoa, and Ben Luc districts. In which, Can Giuoc District is home to the Long An International Port, along with many large-scale industrial zones, many large and small factories with more than 40,000 employees. Especially, Can Giuoc is also located near Hiep Phuoc International Port, a major super-project, oriented to become the largest and the most modern seaport city in Southeast Asia.

Can Giuoc District becomes attractive destination for investors have 960 words, post on sggpnews.org.vn at May 1, 2021. This is cached page on Talk Vietnam. If you want remove this page, please contact us.