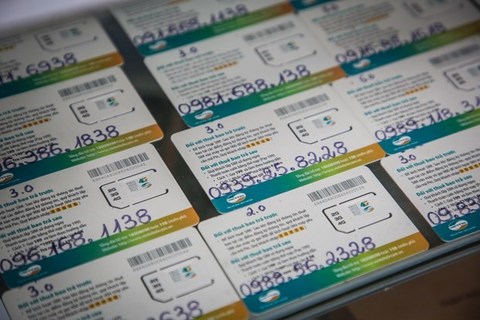 Five per cent of active SIM cards in the Vietnamese market are suspected of not having accurate information. — Photo Vietnamplus.vn

The number of spam messages and calls have dropped since the Government issued new regulations, but there has been a slight spike of unwanted communications recently.

Decree 91/2020/ND-CP was issued to combat spam messages, spam emails and spam calls. But in recent times there has been an increase.

Nguyen Doan Son, a security consultant at the Vietnamese Security Network (VSEC), said that one of the reasons leading to spam ads is information of users being revealed.

Son shared that if users used hi-tech equipment to exploit information, hackers could steal the information through the internet or 3G or 4G network access.

These tools are developing and users pay less attention to security issues, so there are more and more cases of stealing personal information through devices connected to the internet, he said.

Son noted that many companies have been collecting customer information and allowing third parties access who may then sell on the data.

Not only when using smart devices to find information online, users encounter unwanted advertising information, but recently, a series of messages from brands also appear.

Hoang Viet Tien, deputy general secretary of the Viet Nam Internet Association, said that it was estimated that 5 per cent of active SIM cards in the Vietnamese market, are suspected of not having accurate information.

The reason is that these SIMs were pre-activated and some telecom agents registered themselves or used the registration information of other sales agents to run for profit.

Sharing technical factors to prevent spam SIMs that have been implemented in recent years, Tien said that State agencies together with telecom carriers, have come up with a number of solutions to limit spam messages and spam calls.

As a result, the number of unwanted messages has declined significantly which was a good signal to the end users of the telecommunications service.

When messages and calls do not come from strange phone numbers, but from a branded businesses like banks and telecom operators, customers usually do not reject the call.

Ngo Tuan Anh, deputy director of Bkav’s cybersecurity division, said that recently, especially due to the impact of the COVID-19, cyber attacks were more active.

Impersonation or phishing attacks were carried out by createing tricks to attract victims and entice users to click on a links containing viruses. When following the instructions on the link, they would steal accounts and commit fraud, the deputy director explained.

A recent report by the Viet Nam Telecommunications Authority, Ministry of Information and Communications, five telecom operators including Vinaphone, Viettel, MobiFone, Vietnamobile, and Beeline have detected and blocked about 29.5 million calls with signs of fraud from July last year to the end of March this year.

Telecom carriers blocked more than 8.5 million phishing calls in the first three months of this year. In addition to the involvement of regulators and authorities in preventing from the source of information, each individual should increase vigilance and skills needed when using smart devices connected to the internet. — VNS

Advertising information mixed with deceptive content have 666 words, post on bizhub.vn at May 7, 2021. This is cached page on Talk Vietnam. If you want remove this page, please contact us.