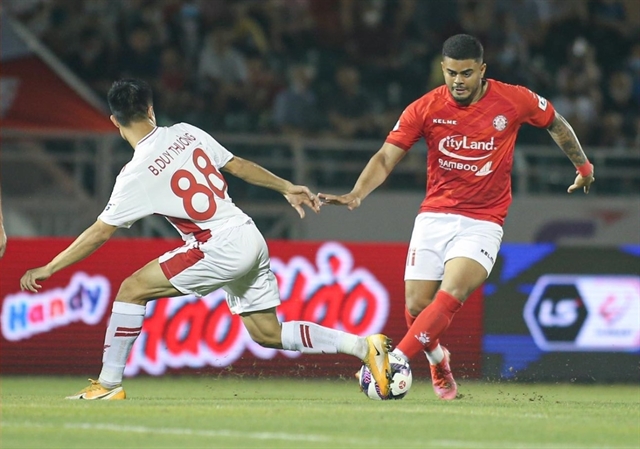 HCM City drew 1-1 with Viettel in the V.League 1 on Tuesday. Photo vtc.vn

HCM City — Hosts HCM City FC drew 1-1 with defending champions Viettel in the V.League 1 on Tuesday, denting their hopes of retaining the title.

Viettel got the opening goal at Thống Nhất Stadium from Bruno Matos in the 17th minute after a howler by home goalkeeper Bui Tien Dung and while they created plenty of chances, the visitors failed to double the lead due to wasteful finishing.

After the break, HCM City equalised in the 62nd minute, with new signing Patrick Da Silva netting the rebound after Sầm Ngọc Đức struck the post with a shot.

Both teams pushed on in search of a winner but in the end, they shared the spoils.

In other matches, a goal from striker  Konan Oussou in the second half helped Nam Định beat Than Quảng Ninh 1-0, dropping the hosts to a third defeat in a row after losses to Hà Nội FC and Viettel at Hàng Đẫy Stadium in Hà Nội.

In the first minutes, the match at Cẩm Phả Stadium was quite balanced as the two teams played cautiously and played the majority of the game in the middle of the park.

In the second half, Oussou and Vũ Thế Vương combined well after a flowing Nam Dinh counter-attack to set Oussou up for an easy goal in the 76th minute.

In the evening’s other match, which was played without fans due to COVID-19 concerns, Hồng Lĩnh Hà Tĩnh defeated visitors Becamex Bình Dương 4-2.

Kelly Kester opened the scoring for Hà Tĩnh in the 16th minute with a header from a free-kick, Phạm Tuấn Hải doubled the score in the 42nd minute and Trần Phi Sơn made it 3-0 at the end of the first half.

It was more of the same after the break, as the hosts raised the score to 4-0 thanks to Nguyễn Thanh Long’s own goal in the 55th minute.

Bình Dương scored consolation goals through Tống Anh Tỷ in the 69th minute and Victor Mansaray in the 88th minute, but it was too little, too late.

The win lifted Hà Tĩnh off the bottom of the table and to 10th place with 12 points. Bình Dương fell to sixth place and face the risk of falling into the relegation group when the league splits soon.

Viettel held to draw with HCM City FC in V.League 1 have 582 words, post on vietnamnews.vn at April 28, 2021. This is cached page on Talk Vietnam. If you want remove this page, please contact us.