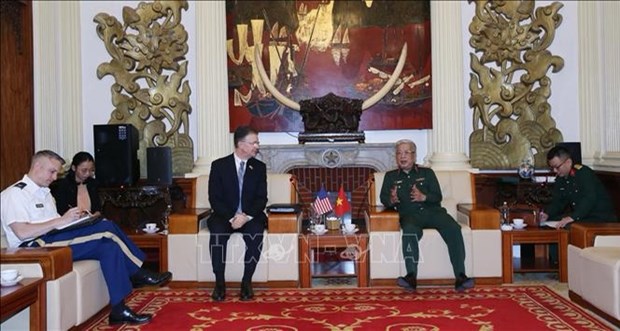 Vinh, who is also head of the standing office of the National Steering Committee on the Settlement of Post-war Unexploded Ordnance and Toxic Chemical Consequences (Steering Committee 701) of Vietnam, praised the diplomat for his contributions to bilateral cooperation in general and overcoming war aftermath in particular.

He congratulated Kritenbrink on his appointment as Assistant Secretary of State for East Asian and Pacific Affairs, suggesting him continue to support and promote the US Congress and Government to increase assistance to Vietnam in settling war consequences.

The Vietnamese Party, Government and Ministry of National Defence always consider war consequence settlement as a priority in cooperation with the US in the time to come, the Deputy Minister said.

Vinh expressed his hope that relevant authorities of the US will continue to work closely with Steering Committee 701 to implement ongoing cooperation projects effectively and on schedule, as well as enhance the communication work in order to highlight the humanitarian significance of the cooperation between the two sides in this field.

For his part, Kritenbrink expressed his satisfaction at the results that the two sides have achieved in overcoming war consequences in Vietnam, saying that these are in line with the commitment of senior Vietnamese and US leaders, and helping to strengthen political trust between the two countries.

The diplomat also pledged to continue supporting Vietnam in this regard in the coming time.

The cooperation has created a foundation for bilateral collaboration in other fields, as well as promoted trust between the two countries, they said./.

Vietnam, US beef up cooperation in war consequence settlement have 433 words, post on en.vietnamplus.vn at April 8, 2021. This is cached page on Talk Vietnam. If you want remove this page, please contact us.