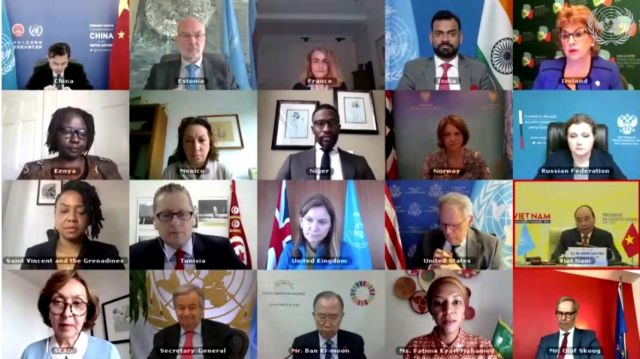 HÀ NỘI – While peace, co-operation and development are the prevailing trends and fervent aspirations of all countries and peoples, the world today is still riddled with challenges, said Vietnamese President Nguyễn Xuân Phúc.

He made the statement at an open debate of United Nations Security Council entitled ‘Enhancing cooperation between the United Nations and regional and subregional organisations in enhancing confidence-building and dialogue in conflict prevention and resolution’ which was held both in-person and online late on Monday.

In the past five years, conflicts have taken away half a million lives across the globe, he said as the current President of the United Nations Security Council.

"In 2020 alone, the world recorded 20 million refugees over 50 million people displaced due to conflicts and around 170 million in need of humanitarian assistance.

“These are the people who are left behind and we call upon our Council to take action against major challenges, such as COVID-19, natural disasters, severe climate change, border and territorial disputes and conflicts, frictions and geostrategic competition. Increased international energy is more crucial than ever,” he said.

In his speech, the President emphasised the importance of confidence and dialogue in international relations, appreciating ties between regional organisations and the United Nations in preventing and resolving conflicts.

He said ASEAN has been working with China to negotiate the establishment of the code of conduct in the South China Sea (called East Sea by Việt Nam) to maintain peace, stability, maritime security and safety in the waters. ASEAN is also playing a central role in seeking an adequate solution to help stabilise the situation in Myanmar, through dialogue and reconciliation, and on April 24, ASEAN leaders will host a special summit to discuss this important issue.

He submitted three proposals at the debate.

First, he said it was essential to promote interactions between the UN and regional organisations to share knowledge and co-ordinate joint endeavours.

Second, it was a must to promote the role of multilateralism and uphold the UN Charter and international law because this is the most concrete and solid foundation to build trust and promote dialogues.

"Early conflict prevention requires inclusive and comprehensive solutions to address the root causes of conflicts such as poverty, hunger inequality and violence.

"The international community should strive to fulfil the 2030 Agenda for Sustainable Development and other global security and development strategies and initiatives, led by the UN, paying greater attention and giving adequate assistance to developing countries who face serious resources constraints," he said.

Regional organisations should take comprehensive agendas and integrate the UN’s development frameworks and initiatives into their national and regional development plans, he said.

ASEAN is making every effort to fulfil the goal, building a community united in politics, diverse in culture, connected in economics and with increased co-operation with external partners by 2025.

"As an active member of ASEAN, Việt Nam has effectively placed COVID-19 under control, enjoyed a high economic growth rate and actively engaged in international integration," he said.

Third, it was necessary to continue enhancing co-operation between the UN Security Council and regional organisations through dialogue and co-operation frameworks and early warning mechanisms on volatile issues.

"The UNSC needs to continue acknowledging and respecting the perspectives, role and contributions of regional organisations,” he said.

With the motto ‘Partnership for a sustainable peace’, Việt Nam will do its best to bring co-operation between the United Nations and regional organisations, including ASEAN, to new heights, he said.

Also at the debate, he presided over the adoption of a Declaration of the Chairman of the Security Council proposed by Việt Nam to affirm the cohesion between the UN and UN Security Council and regional organisations in preventing and resolving conflict, with trust-building and dialogue essential elements.

The declaration called for ensuring cohesion and the complementary nature of co-operation efforts, urging regional organisations to play a supporting role and making recommendations on conflict prevention and resolution for member states in accordance with the UN Charter and related agreements. It suggested the UN Secretary-General propose solutions to promote measures to build trust and dialogue. — VNS

Việt Nam calls for enhancing trust and dialogue to prevent and solve conflicts have 827 words, post on vietnamnews.vn at April 20, 2021. This is cached page on Talk Vietnam. If you want remove this page, please contact us.