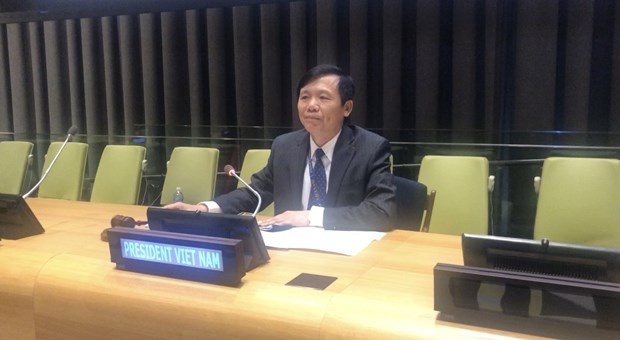 The event, held at the UN headquarters in New York, was also attended by Jan Kubis – Special Envoy of the UN Secretary-General on Libya and head of the UN Support Mission in the country (UNSMIL), UNSMIL Coordinator Raisedon Zenenga, and the permanent representatives of Libya and Chad to the UN.

Ambassador Quy welcomed the particularly important strides in Libya in the recent past, the UNSC 's adoption of Resolution 2570 to assist the implementation of the Libyan-led and -owned ceasefire monitoring mechanism, as well as the election process in this North African country.

He urged the parties concerned in Libya to fully comply with the ceasefire agreement signed on October 23, 2020 while appealing to the parties both inside and outside Libya to fully adhere to the UNSC's arms embargo on the country.

The diplomat emphasised Vietnam's support for the withdrawal of all foreign forces and mercenaries from Libya as in line with the ceasefire deal and the UNSC's related documents.

He expressed his hope that this process is carried out in a timely, orderly, and comprehensive manner so as to maintain and consolidate the obtained achievements and contribute to the lasting peace and stability in Libya and the region.

This dialogue was the second event the UNSC has held at the UN headquarters so far this year, and both meetings took place in April, when Vietnam served as President of the council. The other meetings have been organised via videoconference.

The situation in Libya has seen many significant developments recently, including the long-term ceasefire agreement signed on October 23 last year, the establishment of the Government of National Unity on March 15, 2021, and the relevant sides achieving consensus on the date of elections on December 24, 2021. However, the presence of foreign forces and mercenaries in the country remains./.

UNSC convenes second in-person meeting at UN headquarters this year have 511 words, post on en.vietnamplus.vn at April 30, 2021. This is cached page on Talk Vietnam. If you want remove this page, please contact us.