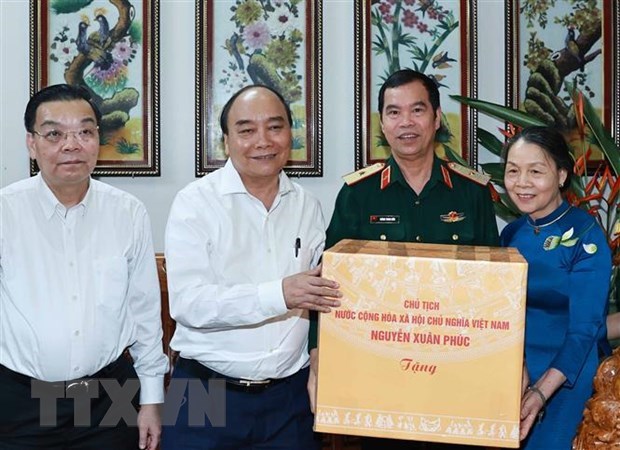 Hanoi (VNA) – State President Nguyen Xuan Phuc on April 29 visited some families in Hanoi whose members took part in the Ho Chi Minh Campaign, which was the peak of the General Offensive and Uprising in the spring of 1975 that led to the South Liberation and National Reunification on April 30 the same year.

The State leader and local officials went to see Maj. Gen. Hoang Trung Kien, who got injured on April 30, 1975 while driving a tank to the Independence Palace, which was the headquarters of the administration of the then Republic of Vietnam. Kien, now residing in Nam Tu Liem district, was the Political Commissar of the High Command of Tank and Armour before retiring.

President Phuc later visited the mother of martyr Nguyen Thai Lai in Tay Ho district. Lai laid down his life in the southern battlefield on April 26, 1975.

Talking to the two families, the President affirmed that the Party and State always keep in mind and are grateful to the heroes, martyrs, and war invalids who dedicated themselves to the cause of national liberation and reunification.

The President asked Hanoi’s leaders and local authorities to better care for revolution contributors so as to partly compensate for their sacrifice and losses.

He also expressed his hope that the families will keep adhering to the Party and State's guidelines, policies, and laws and actively join efforts to help with the capital city's development./.

State President visits families of contributors to national reunification in Hanoi have 370 words, post on en.vietnamplus.vn at April 29, 2021. This is cached page on Talk Vietnam. If you want remove this page, please contact us.