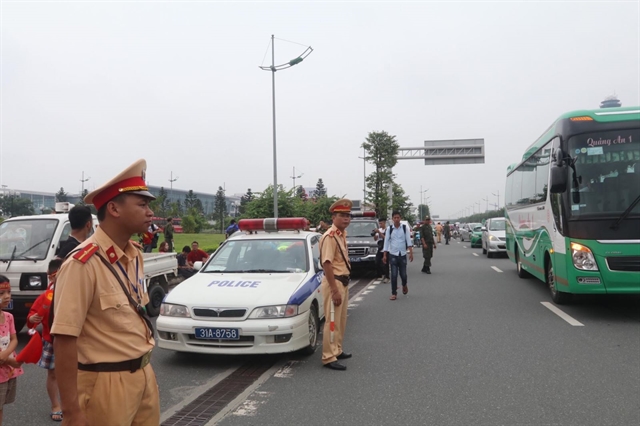 Traffic police force are on duty on a road in Hà Nội. — VNA/VNS Photo

HÀ NỘI — The Traffic Police Department under the Ministry of Public Security has launched a campaign to ensure safety and order for the upcoming holidays and the elections of deputies to the 15th National Assembly and People’s Councils for the 2021-2026 tenure.

During the two-month operation starting from April 15 to June 14, police will strengthen patrols and strictly handle traffic violations on roads, railways and waterways.

Major General Lê Xuân Đức, deputy director of the department, said police forces, vehicles and professional technical equipment have been deployed to ensure public order and traffic safety during the Reunification Day and May Day holidays, the 131st anniversary of Uncle Hồ’s birthday and the elections.

Inspection teams will also be set up to handle violations in key areas, for instance when buses stop, park, pick up and drop off passengers in unauthorised places.

On the railways, the traffic police will work with local authorities, police and the railway sector to inspect, control and handle violations as well as inspect the observance of regulations on railway traffic safety order.

Police launch traffic safety campaign ahead of holidays have 410 words, post on vietnamnews.vn at April 16, 2021. This is cached page on Talk Vietnam. If you want remove this page, please contact us.