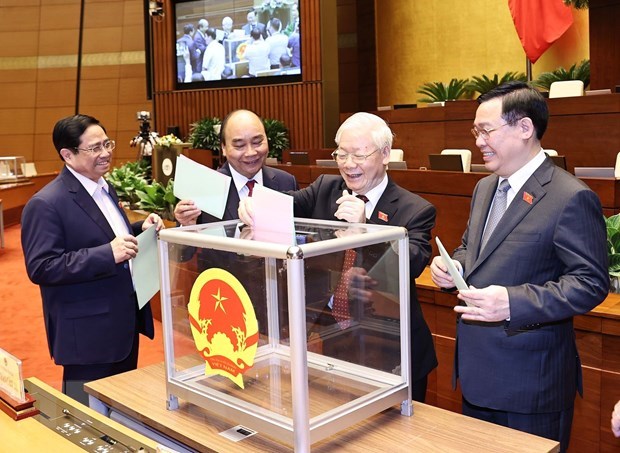 Moscow (VNA) – A Russian analyst has talked about the new leadership of Vietnam in a recent interview with the Vietnam News Agency, highly valuing the virtue and capacity of the country's newly-elected leaders.

Valeria Vershinina, an analyst from the ASEAN Centre of the Moscow State Institute of International Relations (MGIMO) University under the Russian Ministry of Foreign Affairs, noted Party General Secretary Nguyen Phu Trong is assessed as an experienced leader of the Communist Party of Vietnam , and new State President Nguyen Xuan Phuc has established himself as a talented leader during the years he served as the Prime Minister.

The key leaders also harmoniously represent different regions across the country, she added.

Vershinina held that the Vietnamese National Assembly has clear-sightedly selected a person who always supports a reformed economy and technological development as the PM since the country needs to keep up with the Fourth Industrial Revolution in the time ahead.

The new Government leader can ensure a balanced strategy and a new approach to effectively respond to not only the COVID-19 pandemic but also fast changes in the global and regional situation, she said, adding that Pham Minh Chinh's experience and mindset of reform in e-Government building and administrative management will be applicable in the future for national development.

The analyst expressed her belief that with the experience and successes in reforming the economy and maintaining a balanced foreign policy, Vietnam will continue posting fast development and playing a growing role in global and regional processes.

Regarding the outlook for the Vietnam – Russia comprehensive strategic partnership, she said the Southeast Asian nation is always a priority in Russia's foreign policy, and promising cooperation areas for the time ahead include technology, reform, information security, and emergency response./.

New leaders to push Vietnam forwards on development path: Russian analyst have 503 words, post on en.vietnamplus.vn at April 8, 2021. This is cached page on Talk Vietnam. If you want remove this page, please contact us.