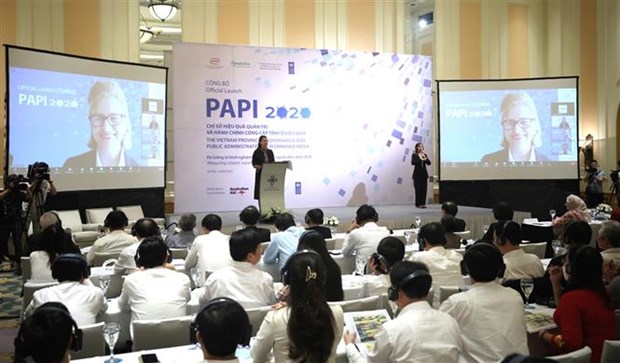 Hanoi (VNA) – The 2020 Provincial Governance and Public Administration Performance Index – PAPI Report on Vietnam was released on April 14, reflecting an incremental improvement in national governance and public administration performance during the 2016-2021 government term.

Since 2018, PAPI has been co-funded by the Department of Foreign Affairs and Trade ( DFAT ) of Australia, the Embassy of Ireland and United Nations Development Programme ( UNDP ) in Vietnam.

The report, which assessed citizen experiences with national and local government performance in governance, public administration, and public service delivery, showed that the Control of Corruption in the Public Sector dimension has improved significantly each year since 2016.

The dimension on Vertical Accountability Towards Citizens also steadily improved during the 2016-2021 term, mainly because an increasing number of citizens have contacted local officials, in particular village heads and People's Council delegates.

"New features of the 2020 PAPI Report include insightful findings on the performance of local governments across two terms (2011-2016 and 2016-2021); experience of internal migrants with accessing services in receiving provinces; and voter perception of women in leadership roles," UNDP Resident Representative in Vietnam Caitlin Wiesen said in her opening remark at the report launch.

"As the Government embarks on a new term, PAPI provides rich and deep datasets on citizens' perception of local government achievement in each of the 63 provinces and important metrics to review and further improve their performance across eight key dimensions of governance," she noted.

Analysis in the 2020 PAPI Report shows that citizen engagement and anti-corruption efforts have a positive correlation with Vietnam's ability to respond to the COVID-19 pandemic.

Australian Ambassador to Vietnam Robyn Mudie, acknowledged an improvement in provincial governance and public administration performance, which may have contributed to Vietnam's successful response to the COVID-19 pandemic.

Findings from the 2020 PAPI Report show that there is a correlation between good governance and effective pandemic responses, she added.

Nguyen Huu Dung, Vice President of the Central Committee of the Vietnam Fatherland Front said he hope that PAPI will continue to serve as a reliable policy monitoring tool that helps promote government accountability and reforms, thereby furthering modern governance.

Over 14,700 citizens were interviewed for the 2020 PAPI Report. This is the largest number of citizens to participate since the survey was first conducted nationwide in 2011. For the first time, the survey also gathered responses from citizens with temporary residence registration status. Nearly 300 migrants were surveyed in six centrally governed municipalities and provinces (Hanoi, Ho Chi Minh City, Bac Ninh, Da Nang, Dong Nai and Binh Duong)./.

National governance, public administration improve: PAPI report have 537 words, post on en.vietnamplus.vn at April 14, 2021. This is cached page on Talk Vietnam. If you want remove this page, please contact us.