Positive signals from the FDI sector

Information from the General Statistics Office of Vietnam (GSO) shows that in the first three months of this year, the total foreign investment capital in Vietnam, including newly-registered capital, adjusted capital, capital contribution, and share purchase of foreign investors, reached nearly $10.13 billion, up 18.5 percent over the same period last year.

Ms. Ho Thi Thu Uyen, Public Affairs Director of Intel Group, said that the company had just been licensed by the People’s Committee of Ho Chi Minh City to expand investment in its factory in the Saigon Hi-Tech Park. Accordingly, this company has adjusted an additional investment capital of $475 million for the category of an assembly and testing plant. This additional investment allows the corporation to increase production of Intel’s 5G products, Intel Core processors with Intel Hybrid technology, and 10th generation Intel Core processors.

According to Ms. Uyen, the above additional investment capital will help the company continue to effectively address the limitations in technology innovation and the capacity of the human resources in Vietnam, contributing to shortening the time to implement its goals. Up to now, the group’s total investment in Vietnam has exceeded $1.5 billion.

Several new factories have come into operation and are about to operate in Hiep Phuoc Industrial Park, in Nha Be District. (Photo: SGGP)
Assessing the investment environment in Vietnam, Mr. Hirai Shinji, Chief Representative of Japan External Trade Organization (JETRO) in HCMC, affirmed that the investment environment in Vietnam in the past five years had had many significant improvements. Indicators, such as administrative procedure reform, labor human resources, and localization ratio, all have continuously advanced.
Especially, in the South, HCMC is considered an eight-sided diamond by foreign investors. Because if you choose the headquarter of the People’s Committee of HCMC as the center, it only takes 2-4 hours to get to neighboring provinces, such as Long An, Dong Nai, Vinh Long, Dong Thap, Ben Tre, Binh Duong, Binh Phuoc, and Tien Giang, by car. Besides, it only takes about 1-5 hours from HCMC to fly to other countries in Asia.

Therefore, recently, many Japanese enterprises have changed their investment plans, and the ‘Vietnam plus One’ policy is most commonly applied. Accordingly, enterprises place their headquarters or set up their representative and trading offices in Vietnam then expand investment in manufacturing factories to other neighboring areas.

Mr. Nguyen Van Be, Chairman of the Hepza Business Association (HBA), said that for a leading foreign enterprise, it only takes a few months to complete investment and construction procedures in Vietnam. However, for domestic enterprises, it usually takes a few years to complete the same procedures. For example, in Hiep Phuoc Industrial Park, because the land rental rates have not been determined, so up to now, many enterprises have not been granted land-use rights certificates, negatively affecting the capital mobilization of enterprises. 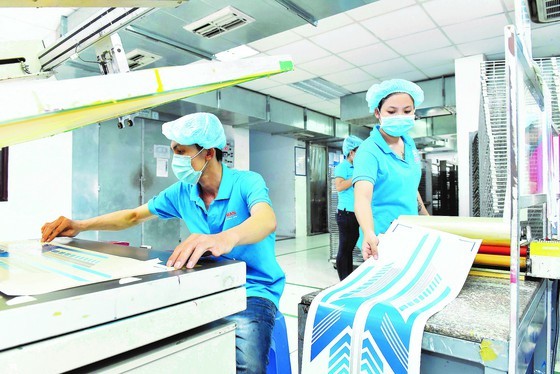 The investor of Hiep Phuoc Industrial Park also faces difficulties when more than 200 hectares of land of the industrial park have completed infrastructure and are ready to attract investors but so far the industrial park has not been able to deploy. The case of Duy Khanh Mechanical Company is typical. It took the company four years to be able to complete the investment license and start the construction of the Duy Khanh Precision Mechanical Factory in the Saigon Hi-Tech Park.

The Government has directed ministries and localities to implement the one-stop-shop mechanism but in practice, it is not effective. Investors still have to go through many departments and agencies to get investment licenses.

According to Mr. Do Phuoc Tong, Chairman of the Ho Chi Minh City Association of Mechanical – Electrical Enterprises, said that there were still many factories producing supporting industry products located in the residential areas. Enterprises themselves really want to move their factories to the export processing zones, industrial parks, and high-tech parks, but it is too difficult for them to squeeze into those places. And yet, to increase the connection opportunities between enterprises operating in the same industry, many enterprises think that specialized industrial zones should be built, but this matter is also very little concerned and implemented by localities.

Not only facing barriers in investment activities, import-export, business, and trade activities also encounter many inadequate regulations that make it difficult for enterprises. Specialized inspection regulations are the most, which continue to be the bottleneck blocking the breakthrough of domestic enterprises.

For example, for the same construction permit, the manufacturing industry must be licensed by both industry and trade and construction industries at the same time. Or to produce food and foodstuff products, enterprises are forced to split into two production lines – one for export and the other for the domestic market. It is because the Ministry of Health requires processed products for the domestic market must be added micronutrients. Meanwhile, for export products, many countries in the world do not allow the addition of these micronutrients.

A survey by the Central Institute for Economic Management also points out that there are still many specialized inspection regulations that have not been removed by ministries and agencies. Even, some ministries and agencies reported to the Government that they have had removed 50 percent of the inappropriate specialized inspection regulations, but in fact, they just switch inspections from before to after at the warehouses of enterprises. The inspection and examination of many ministries and localities are still causing difficulties for enterprises. More worryingly, some ministries have even inserted regulations that are tighter than the laws into circulars and guidelines of their sectors. If this situation is not handled thoroughly, it will be difficult for domestic enterprises to make a breakthrough.

However, along with the above development, there were also tens of thousands of enterprises leaving the market. From 2020 to the end of the first quarter of this year alone, more than 140,000 enterprises left the market. Most of them were SMEs. The reason, on the one hand, is due to weak capital and internal resources, so they could not withstand market shocks, such as the Covid-19 pandemic and natural disasters, especially the ability to compete with foreign enterprises in the context that foreign enterprises are massively entering Vietnam.

On the other hand, SMEs do not have many conditions to access supportive policies from the Government, especially the financial support package. According to many economic experts, SMEs are the most vulnerable businesses.

Improving investment environment: removing barriers, creating equality have 1487 words, post on sggpnews.org.vn at April 7, 2021. This is cached page on Talk Vietnam. If you want remove this page, please contact us.