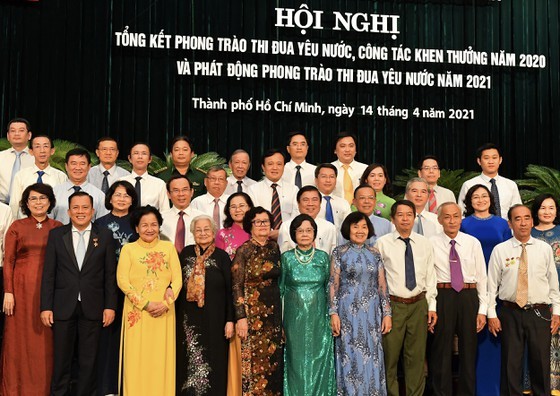 HCMC leaders attend a meeting on emulation movements. (Photo: SGGP)
The emulation movements include:
-Organizing and preparing for the upcoming elections of deputies to the 15th NA and all-level People’s Councils for the 2021-2026 tenure.
-Completing programs and projects approved by the municipal Party Committee via the implementation of one key and three breakthrough programs in the 11th Congress of the HCMC Party Organization for the 2020-2025 tenure.
-Implementing the Decree No. 33/NĐ-CP (ND33) providing guidelines for implementation of the Resolution No.131/2020/QH14 (NQ131) on organizing urban administration in HCMC; continuing to carry out remaining missions of Thu Duc City, completing overall planning scheme of Thu Duc City by 2040 with a vision to 2060; proposing the Central Government to consider special mechanisms for Thu Duc City's development
– Improving the business and investment environment and enhancing competitiveness and providing the second support package to enterprises hit by Covid-19
-Implementing and speeding up the disbursement of public investment and reaching the disbursement of 45 percent and over in the first six months in 2021
-Implementing Directive No.19-CT/TU issued by the HCMC Party Committee on October 19, 2018 on conducting the campaign 'HCMC residents do not litter on roads and canals for a clean city and urban flooding reduction'; striving to gain 50 percent of wards, communes and towns in HCMC to be recognized as "Level-district clean and green area"
– Strengthening the State management of illegal buildings and reducing unauthorized construction by 10 percent compared to the first six months of 2020
– Calling on people to plant tree to reach the "One Person, One Tree" goal in response to the PM's call for planting one billion trees from 2021- 2025
-Establishing the HCMC research institute for innovation and putting it into operation
– Boosting progress of projects, including measures to prevent flooding caused by high tides linked to climate change, construction of Thu Thiem Bridge 2, construction of Ben Thanh – Suoi Tien metro line, the site clearance and compensation of the Metro Line 2; kicking off projects consisting of the upgrading of Ho Chi Minh Museum – Ho Chi Minh City Branch located on the Nha Rong (Dragon House) Wharf , expansion of Nha Be District's Hospital, construction of a railway drainage system in Thu Duc City's Linh Dong Ward; and completing works of the upgrading of Nguyen Huu Canh Street in Binh Thanh District, construction of a drainage system and rebuilding the surface of Huynh Tan Phat Street (the section from Phu Xuan Bridge to Binh Khanh ferry station) in Nha Be District, the construction of a drainage system and upgrading the surface of the communal road No.11 (the section from Dinh Duc Thien Street to Hung Long commune) in Binh Chanh District.
-Dealing with noise pollution in residential areas
-Ensuring national security and public order before, during and after the upcoming elections of deputies to the 15th NA and all-level People’s Councils for the 2021-2026 tenure; reducing crime rates, strengthening the police criminal investigation efforts and enhancing fire protection and prevention

HCMC launches 12 emulation movements in 2021 have 642 words, post on sggpnews.org.vn at April 16, 2021. This is cached page on Talk Vietnam. If you want remove this page, please contact us.