HÀ NỘI — The Hải Vân Pass in the central Vietnamese coastal city of Đà Nẵng has been named among the 10 most beautiful drives in the world by renowned US magazine Travel + Leisure.

PMG analysed more than 7 million Instagram hashtags to find the world's most stunning routes and divided the number of images of selected routes by their length.

With a length of 20 kilometres and 2,686 pictures per km, the Hải Vân Pass came fourth in the list, behind the Great Ocean Road (Australia), Big Sur (California), and Jebel Hafeet (United Arab Emirates). 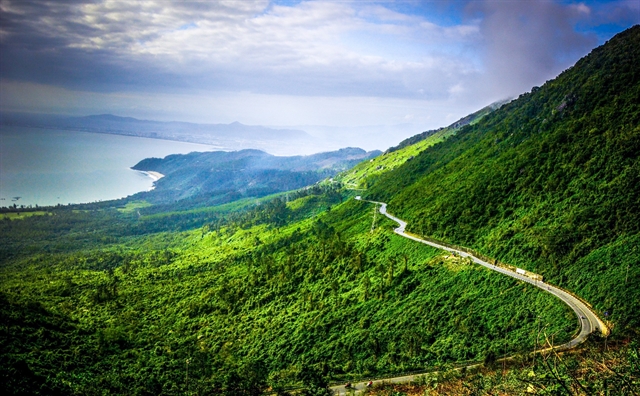 Jonathan Lingham, marketing director at Pentagon Motor Group, told the magazine: “Despite the looming question over international travel, road trips are still on cards, thanks to the luxury and convenience of our wheels.”

“As there are so many driving holiday destinations around the globe, we were curious to find out which route is officially the most beautiful. It’s great to see so many bucket-list-worthy road trips cropping up from all around the world — from the UK to Australia, and Norway to the USA — it proves that everyone can jump in their car and embark on an epic adventure," he added.

According to Travel + Leisure, the Hải Vân Pass was once dubbed "one of the best coast roads in the world" by Jeremy Clarkson, former host of UK motoring television programme Top Gear .

The website also recommended those travelling along the route slow their speed when weather conditions become foggy.

PMG's search noted that the pass has become one of the most popular destinations for visitors to snap photographs on, with more than 55,000 photos taken at the site uploaded to Instagram.

The Hải Vân pass is approximately 20km long and 500m above sea level.

It is on National Highway 1A, some 80km from the heart of Huế to the south and more than 20km from the centre of Đà Nẵng to the north, running across Bạch Mã mountain which stretches from the Trường Sơn range to the sea, creating a natural boundary between Thừa Thiên-Huế Province and Đà Nẵng City.

The pass has lush jungle on one side and the sea on the other. The crooked road winding along the mountainside has been compared to a ribbon crossing heaven and earth. — VNS

Hải Vân Pass named among world's most beautiful drives have 547 words, post on vietnamnews.vn at April 29, 2021. This is cached page on Talk Vietnam. If you want remove this page, please contact us.