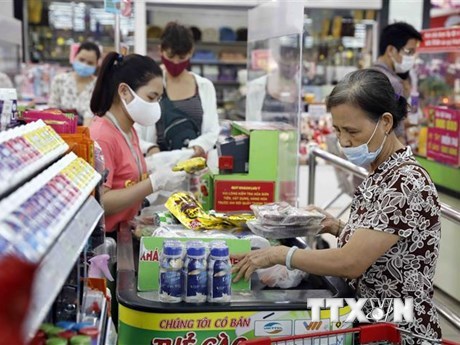 Consumers shop at a supermarket in Vietnam (Illustrative photo: VNA)

Hanoi (VNA) – Vietnam's consumer price index (CPI) in April was down 0.04 percent against the previous month while up 2.7 percent year on year, according to the General Statistics Office (GSO).

The index in the first four months grew 0.89 percent year-on-year, the lowest growth rate since 2016.

Compared to the previous month, a downturn was seen in the prices of four out of 11 main groups of goods and services, with housing and construction materials taking the lead (0.43 percent). It was followed by post and telecommunication services (0.2 percent); food and catering services (0.13 percent); and culture, entertainment and tourism (0.11 percent).

The prices of garment-textile, headwear and footwear remained stable compared to the previous month.

The prices of transport services posted the strongest increase of 0.87 percent, while those of drinking and tobacco 0.14 percent, and equipment and household appliances 0.11 percent.

The GSO's Price Statistics Department attributed the CPI price rise in the first four months to a hike in domestic and export prices of rice as well as the higher demand for the grain for the Lunar New Year (Tet) festival.

Prices of foodstuff in the period rose 0.2 percent year on year, while those of gas and petrol climbed by 14.69 percent and 2.49 percent, respectively, from the previous year.

Prices of educational services in January-April saw a year-on-year rise of 4.48 percent, driven by a tuition fee hike starting from the 2020-21 academic year.

On contrary, electricity prices in the period fell by 5.88 percent over the same period last year.

In the months, airlines and tourism operators introduced a host of promotions to boost tourism. On average, the air ticket prices dropped by 17.4 percent, train fares down 7.39 percent; and tour prices down 3.32 percent.

Domestic gold price in April contracted 1.9 percent over the previous month but went up 13.84 percent year-on-year, making the four-month figure up by 20.84 percent.

The index expanded 0.74 percent in the first four months.

The core inflation rates in April and the first four months of 2021 compared to the same periods last year were the lowest in the past five years./.

April’s CPI inches down 0.04 percent have 528 words, post on en.vietnamplus.vn at April 29, 2021. This is cached page on Talk Vietnam. If you want remove this page, please contact us.