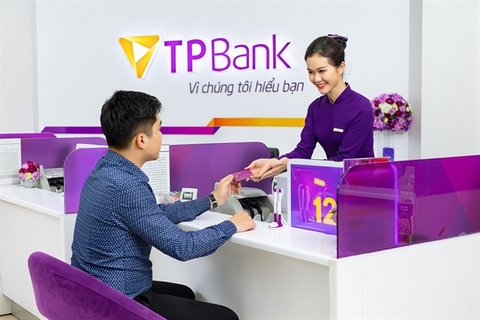 A customer at one of TPBank’s branches. TPBank shares rose 6.25 per cent on Tuesday, supporting the VN-Index’s upward trend. — Photo tpb.vn

On the Ho Chi Minh Stock Exchange (HoSE), the VN-Index climbed 0.04 per cent to 1,186.61 points. The index experienced a volatile session.

After rising to break 1,191.77 points earlier in the session, the index dropped on higher selling pressure. However, the VN-Index still closed the trading day with a small gain.

The trend was widely expected by analysts from securities firms.

“The VN-Index is expected to gain slightly in the next sessions. The index will test resistance territory of 1,190 – 1,200 points,” Bao Viet Securities Co. wrote in a daily report.

The market might still face fluctuations and corrections at this resistance level, the firm added.

Over 577 million shares were traded today on HoSE, worth over VND15.2 trillion.

The VN30-Index, which tracks the 30 biggest stocks on the southern bourse, also increased by 0.24 per cent to 1,194.71 points. Of the 30 large-cap stocks in VN30 basket, twelve stocks rose, while fourteen stocks slid.

During the session, investors poured over VND2.1 trillion into the northern bourse, with more than 119.48 million shares traded.

In general, the market’s liquidity was high with total trading volume of 744 million shares (including shares traded on UPCOM), worth over VND18.08 trillion.

VN-Index inches higher despite a turbulent session have 537 words, post on bizhub.vn at March 3, 2021. This is cached page on Talk Vietnam. If you want remove this page, please contact us.