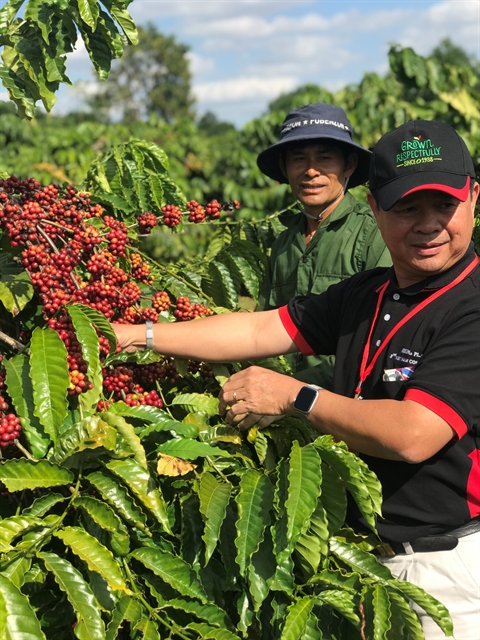 NESCAFÉ Plan of Nestlé Vietnam, one of the Swiss invested corporates in Việt Nam  has made significant contributions to local coffee industry in the past 10 years — Photo courtesy of Nestlé

HÀ NỘI — Việt Nam is a highly attractive destination for investment because of its unique position to capitalise on the global chain shift, said Vietnamese Ambassador to Switzerland Lê Linh Lan.

Lan told the webinar "Market Focus Việt Nam" on Tuesday: "In the pandemic, Việt Nam's economy has proved resilient with a positive growth of 2.91 per cent in 2020 while the rest of the world plunged into a deep recession."

The webinar was organised by Swiss Việt Namese Business Gateway (SVBG) and the Geneva Chamber of Commerce, Industry and Services (CCIG) was also the first official launch of SVBG with Swiss partners and Việt Namese representatives.

Lan mentioned the Government's successful control of the pandemic and effective measures for economic recovery and international economic integration last year contributed to the attraction.

Lan said: "With new-generation FTAs such as CPTPP, EVFTA, RCEP, Việt Nam has become one of the region's fastest-growing and internationally engaged economies, at the centre of a network of 17 FTAs and economic and trade cooperation frameworks with the world's leading economic hubs."

According to the Economist Intelligence Unit’s recent report, Việt Nam has emerged as an attractive foreign direct investment destination in Asia ahead of China and India. The report suggests factors that make Việt Nam more attractive destinations are the incentives for international firms for setting up units to manufacture hi-tech products, the pool of low-cost workers, and the proliferation of free trade agreements, said Lan.

She added: "The US-China trade war and the pandemic have accelerated the shift of the global value chain when European and American companies are relocating investment locations or repatriate manufacturing factories to overcome the over-dependence on a single country in the global supply chain system.

"As Việt Nam has been able to effectively contain the pandemic and is among the first countries to reopen the economy, Việt Nam is better positioned to attract this capital flow trend. The Government acted quickly to embrace this shift in the global supply chain, decided to establish a high-level special working group, charged with the mission of investment promotion inViệt Nam."

Lan recognised innovation and digitalisation as the last highlights of Việt Nam's economy, saying the development of the digital economy for the country's robust and sustainable development was another attraction to investors.

As Việt Nam targeted its digital economy to contribute 30 per cent of the GDP, related businesses have great markets serving both the Government and people in the new era.

Lan added there are more than 100 Swiss companies including big names such as Nestle, ABB, Novartis, Roche, Holcim and Schindler.

These firms have been doing successful business in Việt Nam and with the total investment of around 2 billion Swiss francs, Switzerland was now the sixth biggest European investor inViệt Nam.

She considered Swiss firms with comparative advantages and strengths in technology, innovation, capital and expertise especially in finance, pharmaceutical, food manufacturing would look more to Việt Nam as a safe and attractive destination for doing business in the post-COVID-19 world of tremendous change and globe supply shift.

Lan said: "They will have large room to grow."

The ambassador hoped the FTA negotiations betweenViệt Nam and Switzerland will be completed this year when the two countries celebrate the 50th anniversary of bilateral relations.

With the same point of view, Trade Counselor Nguyễn Đức Thương said that the favourable environment has created very good conditions for foreign investors in Việt Nam. Thương added that Việt Nam is also strong in demographics when it is going through a period of “golden population structure”.

Việt Namese senior leaders are also very interested in creating favourable conditions for foreign investors in terms of the law. The National Assembly of Việt Nam passed a new Law on Investment on June 17, 2020, effective from January 1, 2021, with many new investment incentives.

Thương said even during the pandemic, investment in Việt Nam last year was still very strong, however, he said the top FDI ​​partners were Asian countries of Korea, Japan, and Singapore, Switzerland was currently ranked 19th.

Mentioning Việt Nam as a preferred place to regulate the world’s production chain as the economy of nearly 100 million people has enjoyed political stability in countries and free trade treatment from all major economies of the world, Thương said energy and technology were among top investment fields in Việt Nam.

Attending the webinar, Will Mackereth, Supply Chain director of Nestlé Vietnam said understanding the nutritional deficiencies namely in zinc, iron, iodine, and Vitamin A in the country, Nestlé Vietnam has been providing main products like MILO, Maggi, Nescafé fortified with Vitamins and minerals to millions the local consumers and children.

Mentioning Việt Nam as a hub for added-value production, export and distribution, Nestle's representative said: " We have a lot of o optimism to continue to invest inViệt Nam."

SVBG the first of its kind founded by Việt Namese expatriates in Switzerland, will focus on offering trade information via workshops, forums, and internal bulletins; providing legal consultations and guidance; developing links for technological transfers and improvement; and introducing quality human resources. It will also make recommendations for more favourable business climate to competent agencies of both nations, while organising socio-cultural activities serving its goals.

According to SVBG, Việt Nam was the four biggest trade partner of Switzerland in ASEAN. Since 2012, Việt Nam and the European Free Trade Association (EFTA) – the intergovernmental organisation of Iceland, Liechtenstein, Norway and Switzerland – began negotiations for a FTA, which was expected to be signed this year.— VNS

Việt Nam is an attractive destination for Swiss investors have 1168 words, post on vietnamnews.vn at March 4, 2021. This is cached page on Talk Vietnam. If you want remove this page, please contact us.