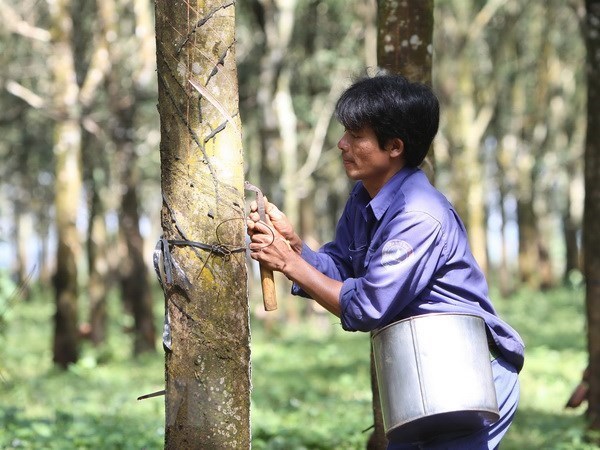 Hanoi (VNA) – As a bear market for rubber is anticipated in 2021, Vietnamese rubber companies have edged down their profit targets for the year.

In its business plan announced at an extraordinary shareholders' meeting at the end of February, the Vietnam Rubber Group (VRG) targets 4.6 trillion VND (199.68 million USD) in after-tax profit in 2021, a year-on-year fall of 12 percent.

It forecast another tough year, particularly for rubber latex , with blame being placed on lower prices. The group's rubber wood and rubber products will both face fierce competition.

Experts from the Viet Capital Securities JSC said that VRG pocketed some 1.1 trillion VND from the divestment, and without this its profit would scarcely have reached such a high level.

It is understandable that VRG has adjusted its profit target downwards this year, they said, in the context of unanticipated changes in the global market.

Meanwhile, PHR, who holds a huge advantage in developing industrial real estate, lowered its revenue target by 15 percent to 1.92 trillion VND and after-tax profit target by 35 percent to 751 billion VND.

Along with gloomy prospects for material rubber demand this year, PHR is also facing other difficulties, including stunted rubber plantations, a shortage of workers, unfavourable climate conditions, and disease in its rubber trees. Revenue and profit will also be critically affected by weakening investment in industrial zones due to the COVID-19 pandemic.

According to a report from the FPT Securities JSC (FPTS), rubber prices will remain low in 2021, at around 32-33 million VND per tonne, leaving a negative impact on the sector's latex business./.

Rubber companies set lower profit targets for 2021 have 454 words, post on en.vietnamplus.vn at March 4, 2021. This is cached page on Talk Vietnam. If you want remove this page, please contact us.