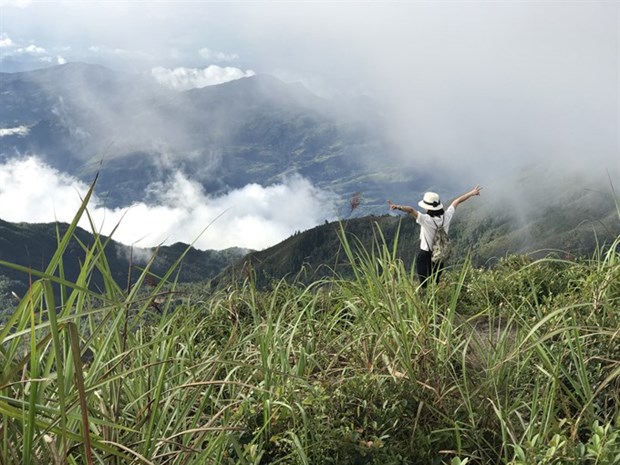 Hanoi (VNS/VNA) – Located 1,000m above sea level, Ho Thau commune in the northern mountains has cool weather all year round and breathtaking landscapes.

The commune, with thousands of hectares of terraced rice fields and topped with the "grey hat" of Chieu Lau Thi Peak, is considered the capital of the Red Dao ethnic group, which numbers about 450,000 people in Vietnam alone. The area is also the starting point for the Chay River, which runs like a giant snake through the mountains and forests.

It takes half a day riding on motorbikes to reach Tan Phong village in Ho Thau commune from Thong Nguyen commune through a 35km distance of terraced fields, forests and grass fields surrounding other Red Dao villages, Nam Khoa, and Nam Ai.

Then we feasted our eyes on the green mountain forests surrounding yellow terraced rice fields shining in the sun. Our rest was marked by relaxing talks with local farmers, who were busy harvesting their fields.

After long hours of bumpy travel, we finally had lunch in a homestay in Tan Phong village, which had a spectacular view over a valley. Truong Cong Dinh, chairman of Ho Thau Commune, said the focus was on developing ecological tourism, even risky tours of Chieu Lau thi Peak, while preserving the cultures of tribal people.

"To further promote tourism, the authorities use financial resources from the province and districts to advertise local destinations, pay for train tourism and encourage households to open homestays," he said. "Hoang Su Phi district authorities have called for investors to open more restaurants, hotels, hold motorbike races and establish trekking routes from Chieu Lau Thi peak to nearby primitive forests."

Trieuj Mui Mui, owner of Homestay Chan Mui, one among two experimental homestays in a project titled Improving the Livelihood of Ethnic Minorities through Community-Based Tourism sponsored by Swiss-based Helvetas Intercooperation and the Centre for Rural Economy Development, said her family had received hundreds of tourists in the past year.

"It makes us busier, but happier, to offer guests a close look at a Red Dao family," she said, "The guests often stay one or two nights with us, have meals and enjoy traditional singing and dancing by locals. Since we stay far from the centre of the district, we often pay more to buy goods and food from the plain because it takes more time to transport them here," she said.

The 12km road was covered with mud and rocks and rain-caused erosion. Our bikes bumped up and down over the rocks like wild horses. In some places, they did not seem to touch the road, but seemed to fly over the rocks. Many times we had to walk so as not to fall down steep cliffs.

But the surrounding scenery was great, with mountains after mountains stretching forever, huge rocky hills with red moss that glowed inn the sunlight – and wild orchids in many colours. Higher up the mountains were pine forests like those in Europe. Streams trickled and gushed down the hillsides. Birds sung in the trees.

We sometimes saw farmers' timber houses, ideal spots for resting and taking photos of magnificent scenery over the valleys.

From the peaks, the sky seems to be closer with so many clouds to nurture the imagination.

After nearly three hours, we reached a height of 2,000m and then trekked 400m to the peak. We had to hurry as it got dark quickly and we had to return before night set in and the roads became too horrible to navigate.

It was colder here. I put on another jacket, but got hot again as the steep climb and moist air made it hard to breathe. We had to walk slower and take deeper breaths.

Our xe om drivers were useful guides, willing to carry our bags and help us by hand through hard-to-climb places. "The best weather for climbing is in winter," said Ban Ta Lieu, my driver. "At that time, both the roads for biking and the paths for trekking are drier and easier to climb."

Many tourists choose to stay overnight at a homestay at the 2,000m high stop so that they can climb up early in the morning to meet the first sunlight hitting the peak.

"Winter and spring are a better time to see clouds at the peak," he said. "In summer, clouds are more beautiful in the afternoon. Winter offer nice views of maple forests, while summer has do quyen (Rhododendron) flowers in full bloom. In May and June, locals water their terrace rice fields while in autumn, September and October, they harvest their crops.

We passed 100-year-old tea trees with moss all over their trunks. That was Shan Tuyet tea that grows at a height of more than 2,000m above the sea level. The tea leaves get wind and fog for four seasons, sprouting valuable leaves used for people's health.

After nearly one hour trekking, we reached the peak, where a triangle stated that it was 2,402m high. We took many photos while watching clouds hanging in the middle of other peaks and a zigzagging road that we travelled on two hours ago. In the far distance, there were terrace rice fields. I felt I was so small in front of Mother Nature herself. I admired the locals who have toiled hard to make a living from this land.

Chieu Lau Thi and Tay Con Linh (2,427m), located in the northwest of Ha Giang Province, are two highest peaks in the northeast of the country. Many trekkers try their strength conquering them – without the help of chair lifts!.-VNA

Red Dao 'capital’ is mountain wonderland have 993 words, post on en.vietnamplus.vn at December 4, 2017. This is cached page on Talk Vietnam. If you want remove this page, please contact us.