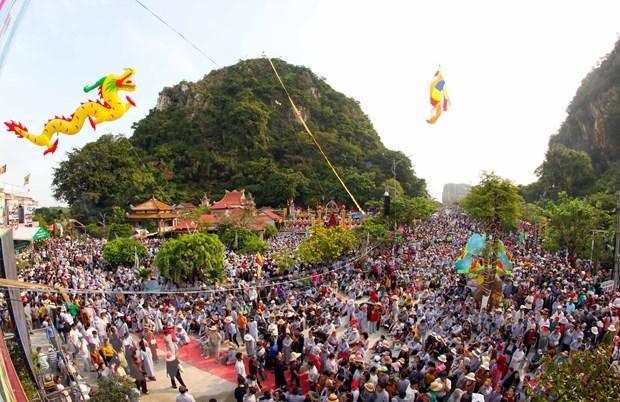 An overview of the Quan The Am festival on February 19 (Photo: VNA)

Hanoi (VNA) – A ceremony was held by the People's Committee of Ngu Hanh Son district in the central city of Da Nang on March 25 to receive a certificate recognising the Quan The Am (Avalokitesvara Bodhisattva) festival as national intangible cultural heritage .

It is one of the traditional festivals associated with Ngu Hanh Son (Marble Mountains) and the religious life of local residents.

The Quan The Am-Ngu Hanh Son festival, also known as Quan Am festival held annually on the 12th day of the second lunar month, takes place at the Quan The Am pagoda in Su Van Hanh Street, Hoa Hai ward, Ngu Hanh Son district, and other sites at Ngu Hanh Son .

According to researchers, Buddhism has been practised in Da Nang since the 17th century, and Ngu Hanh Son has been seen as the first cradle and the centre of Buddhism of Vietnam under the reign of the Nguyen Lords (1558-1777).

When Buddhism entering Da Nang , local residents had built Ngu Hanh Son with a cluster of pagodas. Most of the five mountains of Ngu Hanh Son house ancient pagodas, which was constructed in different periods of time with different architectures. 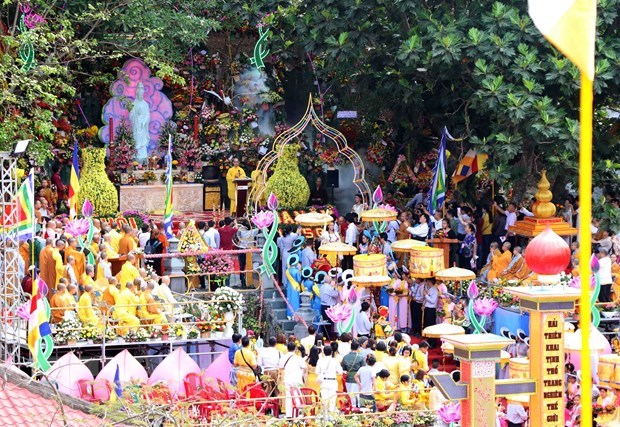 Main rituals of the Quan The Am festival (Photo: VNA)

The Marble Mountains, also known as Non Nuoc Mountains, is a cluster of five marble and limestone mountains south of Da Nang.

The five were named by King Minh Mang in the 19th century after the five elements: Kim (metal), Thuy (water), Moc (wood), Hoa (fire), and Tho (earth).

In Quan Am cave, stalactites cling to cliffs, forming a statue of Avalokitesvara Bodhisattva as tall as a real person, helping to attract Buddhist followers as well as domestic and foreign tourists.

Therefore, Ngu Hanh Son is not only a historic and cultural relic site but also a religious one where Buddhist monks and nuns pray for happiness for people and visitors seek peace of mind.

The Marble Mountains landscape site was named a National Special Relic in 2018.

Apart from the Quan The Am festival, the locality has preserved many other religious works of Vietnamese, Hoa and Cham people, ancient objects and festivals. 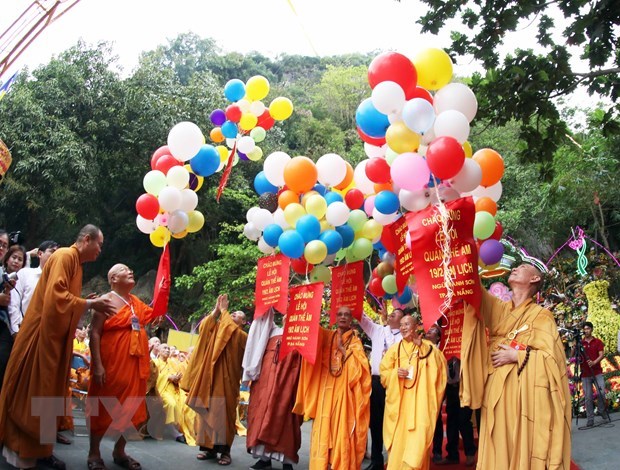 At the Quan The Am festival (Photo: VNA)

The Quan The Am festival is held on the 19th day of the second lunar new year to pray for peace and happiness, arouse good deeds and promote the harmony between Buddhism and patriotism.

Like other festivals, the Quan The Am festival comprises rituals associated with Buddhism, and the festive section with a range of cultural and sport activities and games that mirror traditional culture.

There is also a ritual held on the night of the 18th day to pray for peace and prosperity for the nation.

The festival has been official held since 1956, and as from 1991, it has lasted for three days, from the 17th to the 19th days of the second lunar month, attracting thousands of Buddhist followers and domestic and foreign tourists.

In 2000, the Vietnam National Administration of Tourism listed the festival as one of the 15 biggest national festivals.

The Ministry of Culture, Sports and Tourism on February 3 issued a decision adding the festival to the list of national intangible cultural heritage.

The recognition brings the number of national intangible culture heritages in Da Nang to six, including the stone engraving products of Non Nuoc stone carving village and the Cau Ngu (whale worshipping) festival – a spiritual ritual of fishing communities in coastal Vietnam where residents pray for a bumper fishing year and for peace.

They are popular among many tourists, contributing to the conservation and development of traditional cultural values as well as sustainable tourism./.

Quan The Am festival in Da Nang – national intangible cultural heritage ​ have 753 words, post on en.vietnamplus.vn at March 26, 2021. This is cached page on Talk Vietnam. If you want remove this page, please contact us.