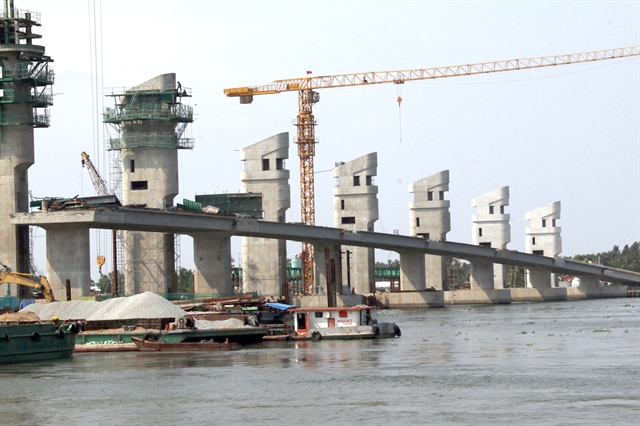 HCM CITY — Saltwater intrusion in the Cửu Long (Mekong) Delta will continue to increase in March and April, according to the National Centre for Hydro-Meteorology Forecasting.

The delta, the country's largest rice, fruit and seafood producer, is facing a higher than normal level of saltwater intrusion from the sea through river mouths in the ongoing dry season. However, it is not as severe as the level of the previous dry season.

The delta's provinces have dredged irrigation canals to store more water and upgraded and built dams and sluices to prevent saltwater intrusion and store fresh water.

Farmers in Tiền Giang, the country's largest fruit producer, have stored irrigation water in their orchard ditches for fruit and other crops.

In Cà Mau Province, farmers have stored fresh water in containers and have switched to growing drought – resistant crops.

Kiên Giang Province is speeding up the phase one construction of the Cái Lớn – Cái Bé irrigation system to serve agricultural production and local households.

The irrigation system, which is the largest of its kind in the delta, connects the Cái Lớn River and the Cái Bé River and is expected to improve agriculture and aquaculture and control saltwater intrusion.

Though the Cái Bé sluice is expected to be put into official operation in June, it began operating early this month, helping to prevent saltwater intrusion on more than 20,000ha of farming areas.

Construction of the Cái Lớn sluice is expected to be finished in September, while the Xẻo Rô sluice in Kiên Giang is slated to be completed in October.

When the Cái Lớn – Cái Bé irrigation system and Xẻo Rô sluice are put into operation, they will benefit a total area of 384,120ha, including 346,241ha of agriculture and aquaculture, in Kiên Giang, Hậu Giang, Cà Mau and Bạc Liêu provinces in the delta. – VNS

Mekong Delta faces peak saltwater intrusion in March, April have 469 words, post on vietnamnews.vn at March 4, 2021. This is cached page on Talk Vietnam. If you want remove this page, please contact us.