The girl who was rescued after falling from the 12th floor of an apartment building in Hanoi has just been discharged from the hospital in good health. On Friday morning, the three-year-old girl waved her hands merrily to say goodbye to doctors at the Hanoi-based National Children’s Hospital.

Dr Hoang Hai Duc from the hospital said the girl has recovered well.

“It is like a miracle that the baby did not have serious injuries after falling from the 12th floor,” the doctor said. “She did not have a fever, coughing, breathing difficulties and her urinary tract functions normally. Her hip has been relocated and put in a cast. X-ray results were normal. The results of the CT scan of her brain revealed it was also normal.”

Doctors asked her parents to return with her after two or three weeks to recheck the hip.

On March 4, representatives from the hospital came to visit and give presents to the girl before she was discharged. 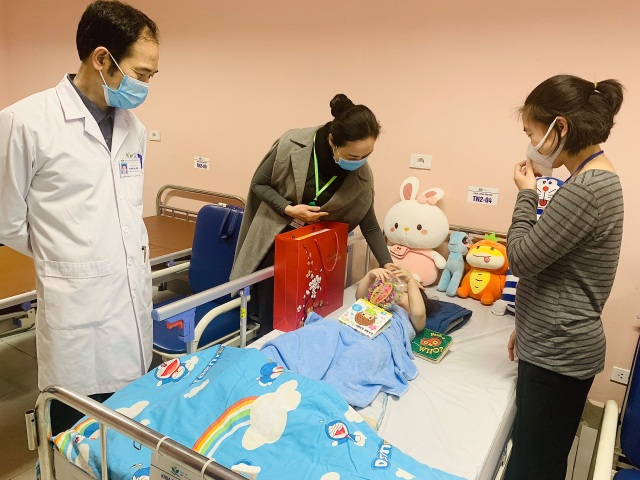 Speaking at the meeting, her mother expressed her sincere thanks to the doctors for their treatment to her daughter.

“This was such great happiness for our family that our daughter was saved,” she said

On February 28, the little girl climbed out of the balcony of her apartment on the 12th-floor of the 60B Apartment Building on Nguyen Huy Tuong Street when her parents came out to see off guests. Some people at the opposite building saw her and screamed out for help.

A truck driver, Nguyen Ngoc Manh, who was waiting for customers at the location heard the screams and came out of his truck to see the girl hanging on the balcony.

He rushed out to the building and climbed onto the metal roof on the ground floor to catch the baby. The baby hung for some seconds before she fell. Luckily the man was able to catch her.

The 31-year-old driver has received letters of praise and rewards from PM Nguyen Xuan Phuc, Hanoi leaders, and the wider public for his bravery and quick actions that saved the little girl.

Little girl discharged from hospital after recovering from 12th-floor balcony fall have 518 words, post on dtinews.vn at March 5, 2021. This is cached page on Talk Vietnam. If you want remove this page, please contact us.