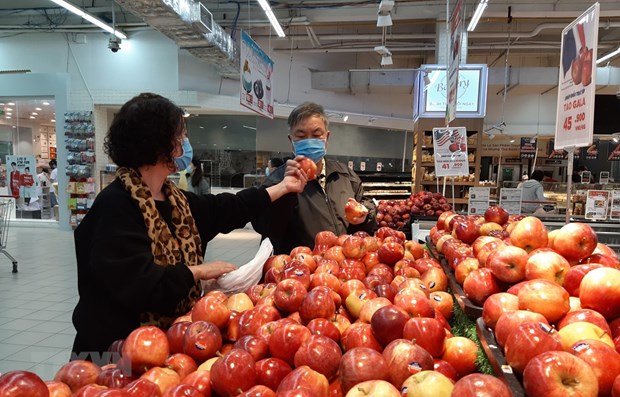 At a supermarket in Hanoi (Photo: VNA)

Hanoi (VNA) – The March CPI in Hanoi fell 0.21 percent month-on-month but rose 1.12 percent year-on-year, according to the municipal Statistics Office.

Seven out of 11 groups of commodities posted price declines in March compared to February, with food and catering services experiencing a fall of 1.54 percent, driven by declines in the price of food (2.24 percent) and fruit and vegetables (8.97 percent). Many types of fruit and vegetables saw a bumper harvest, which provided the market with an abundant supply and eased the pressure on prices.

Growth was seen in three groups, with the largest rise of 2.36 percent recorded in transport as a result of petrol and oil prices being revised upwards twice during the month, by a total of 6.87 percent and 7.9 percent, respectively.

The index rose 0.04 percent year-on-year in the first quarter on the back of rising prices in education services (2.72 percent), beverages and tobacco (1.4 percent), housing, electricity, water, fuel, and construction materials (0.8 percent), and home appliances (0.78 percent).

Three groups posted weakening prices, with the largest fall of 5.13 percent seen in transport as people refrained from travelling during the Tet (Lunar New Year) holiday following a resurgence of COVID-19 in late January.

Gold prices in March were down 3.51 percent month-on-month but up 15.45 percent year-on-year. They grew by an average of 22.33 percent from January to March./.

Hanoi: March CPI down 0.21 percent against February have 337 words, post on en.vietnamplus.vn at March 31, 2021. This is cached page on Talk Vietnam. If you want remove this page, please contact us.