One day I found myself on Hà Nội's Lò Sũ Street and just couldn't keep my eyes away from a cosy and chic restaurant with quite an intriguing name: Etesia. Looking it up later, I was even more impressed by the concept and the menu.

Etesia is a "kitchen counter" restaurant serving contemporary European cuisine, with chefs at work in a fully open kitchen. Countertop dining has been heating up the restaurant scene in major cities around the world. It's a place to see — the kitchen, the chefs, and the action — and to be seen. Etesia's Executive Chef Benjamin Morelle has experience as a sous chef at a 1-star Michelin restaurant in Paris.

After months of anticipation, my friends and I finally managed to find the time to enjoy what the restaurant has to offer.

It actually belongs to Polite & Co, a much-loved cocktail bar that was the first traditional pub in Hà Nội. I had high hopes for Etesia given its sister was long established, and was not disappointed. Even my friend, who has high standards and is hard to impress, was blown away. 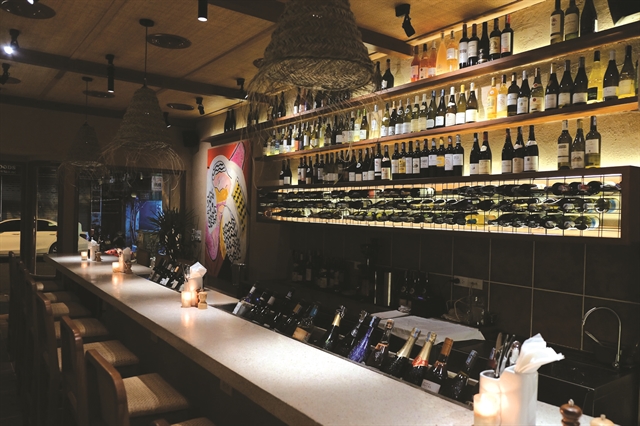 Since we came for dinner, we ordered from the chef's menu only. They also have a happy hour from 5 to 7pm, with "buy one get one free" drinks, which we took advantage of.

We ordered the Sea Bass Ceviche (VNĐ160,000) with jackfruit, coriander, lime juice, and chili. The presentation was impressive. All the dinnerware was incredibly attractive but still allowed the food to take the spotlight.

The white sea bass was cured with lime juice and tasted incredibly fresh. The sweetness from the jackfruit balanced out the acidity perfectly. Some thin slices of red radish not only helped decorate the dish but also added some crunchy texture to each bite.

Later on, as we talked to the chef, we found that he enjoyed working with fish and wanted to offer more such dishes. The menu included other selections featuring mackerel, salmon and tuna, and I wondered if the clear Mediterranean influences would see customers enjoying more varieties of fish. 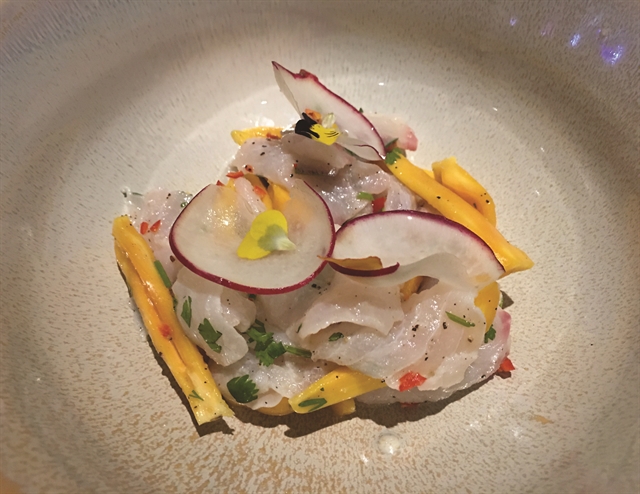 We also tried the Tuna Tataki (VNĐ230,000), which was a little underwhelming. It came with mashed eggplant, passion fruit, and a fennel salad, while the tuna was seared with sesame crust. I enjoyed the fennel salad, but couldn't taste the eggplant at all. I was somewhat disappointed after how high the bar had been set by the ceviche.

When the mains arrived, however, I was delighted once again by how talented the chef and his flavour palette are.

We ordered Ris de Veau (VNĐ450,000), or calf sweetbread, roasted in butter, with smoked eel, ponzu, and mắc mật seed. Having lived in Japan and being familiar with ponzu as well as eel as ingredients, I never knew they could be combined into such an amazing sauce. The white sauce packed a punch from umami that went perfectly with the super tender meat. Such combinations and textures were unlike anything I've ever tasted before. Had it not been for the menu description, the flavour combination would have forever remained a mystery in my mind.

My friend had the Candied Iberian Pork Cheek (VNĐ350,000) with red wine and mashed celery root. It was presented in a beautiful light brown deep dish whose shape reminded me of a galaxy. He described the meat as the tender, melt in your mouth variety. While both mains were equally delicious, we all agreed that the Ris de Veau is a must-try.

Lastly, for dessert, we tried the Milk rice (VNĐ140,000), which was similar to rice pudding. The caramelised walnuts were delightful, adding a sweet crunch. There was another layer of salted butter caramel and lime zest mousse at the bottom, which was the perfect caramel flavour. Some caramel can be too buttery and creamy, but this was excellent. While the Milk Rice was mild in flavour and didn't particularly stand out, the addition of salted butter caramel and caramelised walnuts made it a dessert well worth trying.

Everything was indescribably delicious. Such flavour explosions were well worth the money to find out just how much great food can delight guests. Such passion in delivering dishes in a warm, cosy setting really made it the perfect dining experience that throws out a challenge to other restaurants.

Since we booked three seats at the counter, we didn't get to sit facing the chefs and the open kitchen to chat with them and hear their stories. I noticed a general lack of interaction between chefs and customers, despite the counter dining concept, perhaps because of the language barrier or because such a friendly, casual culture is yet to take hold in Việt Nam. The wine list, meanwhile, was unremarkable, with no sommelier on hand to give advice on pairings.

But there will be a next time, when we can once more be delighted by Etesia's complex flavours and wonderful atmosphere. VNS

Flavourful delights by the kitchen counter have 1044 words, post on vietnamnews.vn at March 7, 2021. This is cached page on Talk Vietnam. If you want remove this page, please contact us.