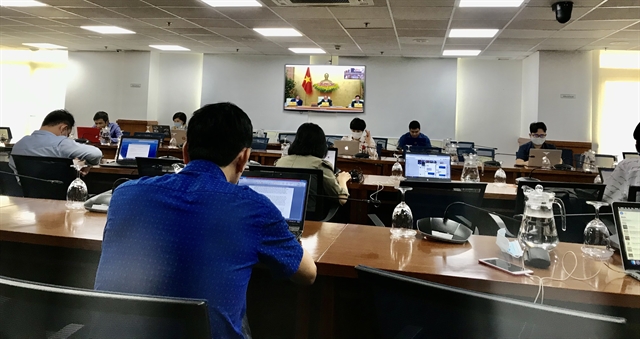 HCM CITY — HCM City is likely to meet the year's target for budget revenue of VNĐ365 trillion (US$15.86 billion) assigned by the central government, a city official said at an online Government meeting on Tuesday.

Võ Văn Hoan, vice chairman of the city People's Committee, said in the first two months, on average the city collected VNĐ2.9 trillion each day, which was higher than the average daily revenue.

In January, the city collected VNĐ40 trillion, up 2.9 per cent year-on-year, he added.

The Tax Department aims to collect at least 25 per cent of the yearly budget revenue target in the first quarter.

The city's retail sales of goods and services increased by 4.7 per cent, while industrial production went up 6 per cent in the first two months.

However, the service sector, especially tourism and accommodations, which accounts for more than 60 per cent of the city's total budget revenue, has been hit hardest.

Tourism revenues decreased by 70 per cent with accommodation services dropping by 14 per cent. The outbreak has caused a significant decline in international visitors to the country, according to Hoan.

For pandemic prevention, the city has contained the infection hotspot at Tân Sơn Nhất international airport with 36 cases recorded since the end of January. The city has gone 20 days without any locally transmitted infections, he said.

Some non-essential services have gradually reopened. Students returned to school on March 1.

The city has ordered individuals and organisations to continue to strictly implement precautions against the virus.

"The city is always ready for the worst pandemic scenario," he said.

The city will continue to complete its dual goal of economic development and protection against the pandemic, according to Hoan.

It plans to develop more solutions to support enterprises and residents affected by the COVID-19 pandemic as part of its effort to revive business activities.

The city will also promote domestic tourism and strengthen linkages with other provinces.

It will continue to promote e-commerce, online businesses, non-cash payments for a digital economy, start-up creation and technological innovation, and commercialisation of research products. — VNS

City to meet yearly budget revenue targets set by Gov’t have 480 words, post on vietnamnews.vn at March 4, 2021. This is cached page on Talk Vietnam. If you want remove this page, please contact us.